Yup, I know, it’s already July in northcentral Pennsylvania and there’s no snow to be seen. In fact, it’s now been months since the last snow melted here. But, I remember how it was last winter when the easiest way to get around in the Big Woods was on snowshoes – and how the old neoprene bindings on my snowshoes were almost worn through. 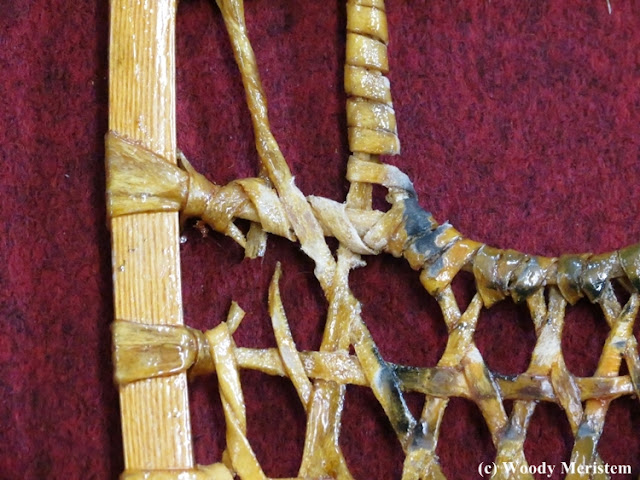 This pair of snowshoes was of a style often called “Green Mountain Bearpaw”, 10” wide and 36” long with rounded toe and heel. They’re by far my favorite shape of snowshoe, large enough to provide decent floatation and short enough to be easily maneuverable in thick vegetation. Some of the folks I worked with over the years preferred the “Alaska” style, 10” by 58” – to me that was like wearing skis in the brush without the benefit of speed.

The worn-through lacing said it was time to relace the snowshoes. Having laced snowshoes with both neoprene (“sticky” and almost impossible to pull tight) and rawhide (wet, stinky, and hard on the hands), I chose to use the same flat tubular nylon webbing (1/2” wide) that I’ve previously used to lace five pairs of snowshoes. But, first it was time to remove the old lacing, and then scrape and sand the white ash frames to remove most of the old varnish and smooth any rough spots.

After putting a couple of coats of good quality spar varnish on the ash frames, I laced the body of the snowshoes; the pattern is pretty standard and directions are readily available on-line. A tight pattern makes for smaller air spaces and thus better floatation. 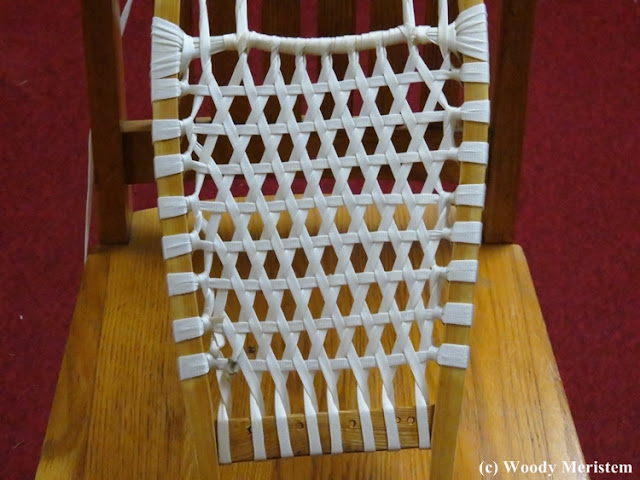 When the body lacing was done, it was time to lace the toe and heel with 3/8" wide webbing – on this pair I used the same lacing pattern on both toe and heel. 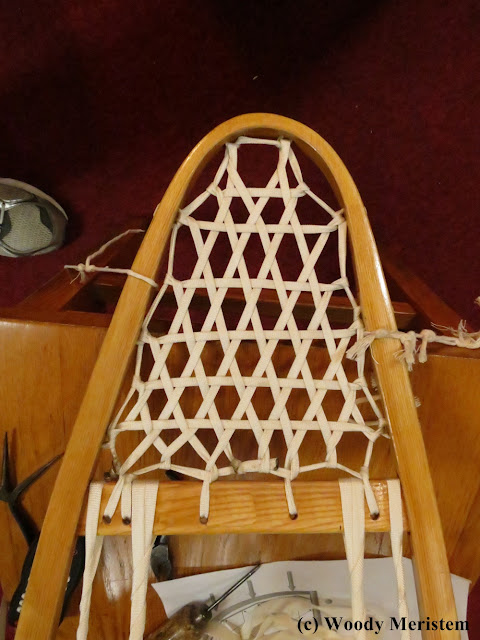 Finally the wood frame at toe and heel were wrapped with lacing material to help protect them from abrasion.

Yes, the lacing is white, pretty garish. A few coats (five on this pair) of spar varnish and the ash frame is protected from water and the white lacing amazingly changes to an amber color that closely resembles the color of the original rawhide lacing.

Done now, and all they need is a new pair of bindings to secure the snowshoes to my feet.

Posted by Woody Meristem at 4:01 AM

Nothing like a good pair of snowshoes. I have several, for use in different snow conditions, but I've certainly never tried to lace a pair! Looks like a real challenge to do it right; well done!

Where can I buy the white lacing?

The lacing for the snowshoes I've made or repaired comes from this company -- https://snowshoe.com/collections/repair-relace/products/snowshoe-lacing-packs?variant=7394660155439