It wasn’t long after H dropped me off on the ridgetop that something gold caught my eye. That gold thing turned out to be the backlit pupal case of one of the many gypsy moths that defoliated the ridgetop last year. There wasn’t just one bit of gold, there were two hanging from the branches of a small tree – 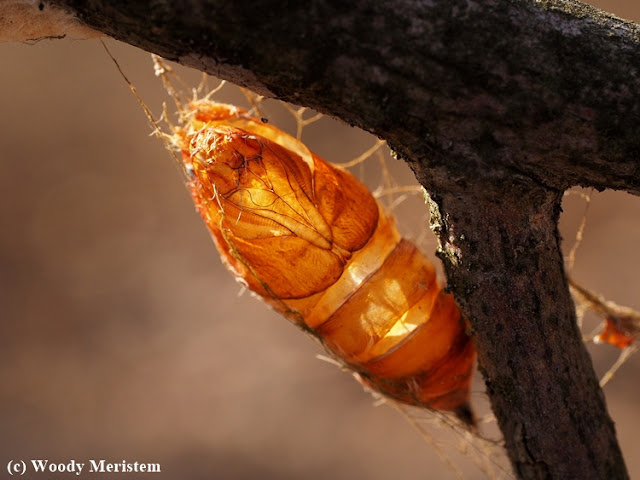 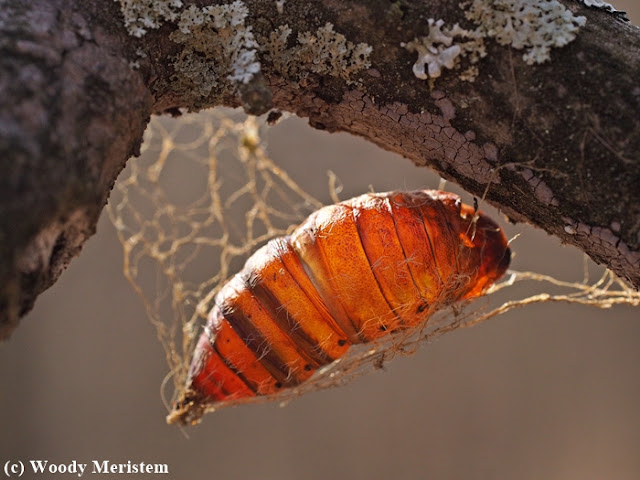 An old, old road leads from the ridgetop to the valley below. Along the road’s cutbank grow an interesting mix of mosses and lichens, one especially interesting one was the pink earth lichen growing on a patch of dry infertile soil – 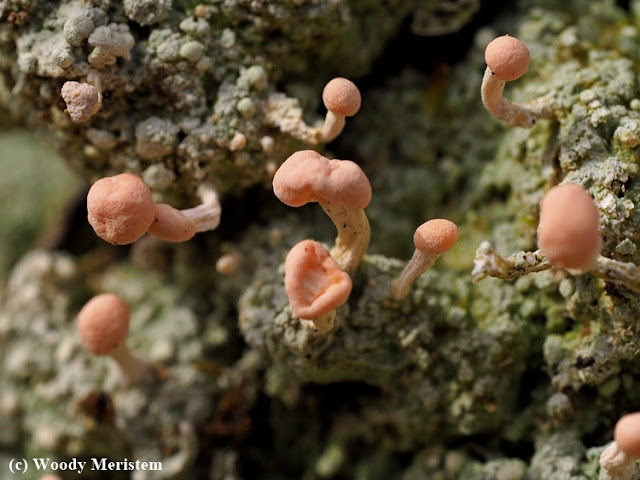 A bit further along a mourning cloak butterfly flew up from the side of the old road, only the second I’d seen this year, roused from hibernation by the warm spring sun – 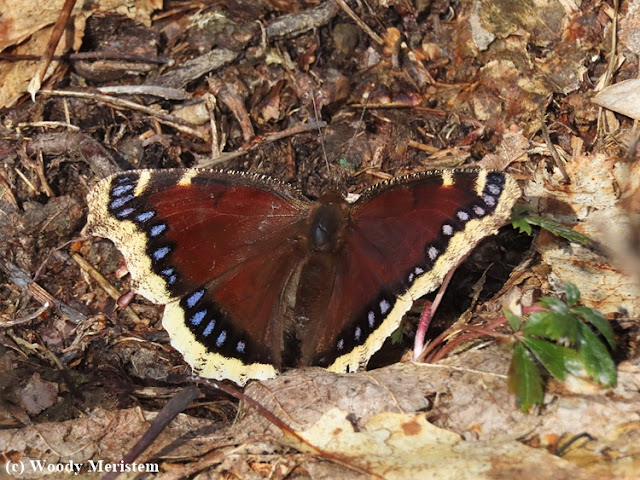 Further along, down into the valley now, I passed a large dead white ash tree that had lost most of its limbs and bark. On the trunk were the tracks of the feeding galleries of the emerald ash borer, an invasive insect that is responsible for the death of 98 percent of the ash in the area. 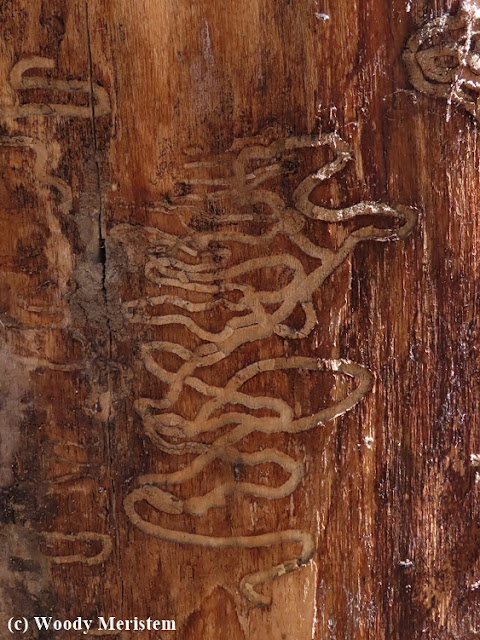 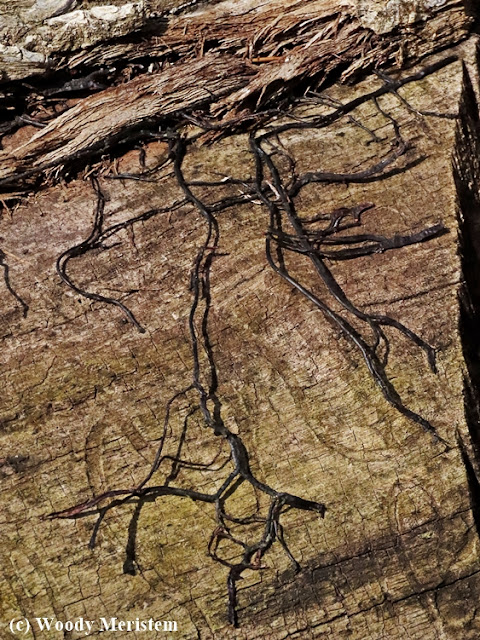 Both the insect and the fungus kill trees, either one might have been responsible for killing what had been a fine tree.

Not all fungi kill trees, some are actually beneficial to trees and others decompose dead woody material. I couldn’t identify this rather attractive bracket fungus that grew on another fallen branch last year, but the lower side indicated it was a polypore – 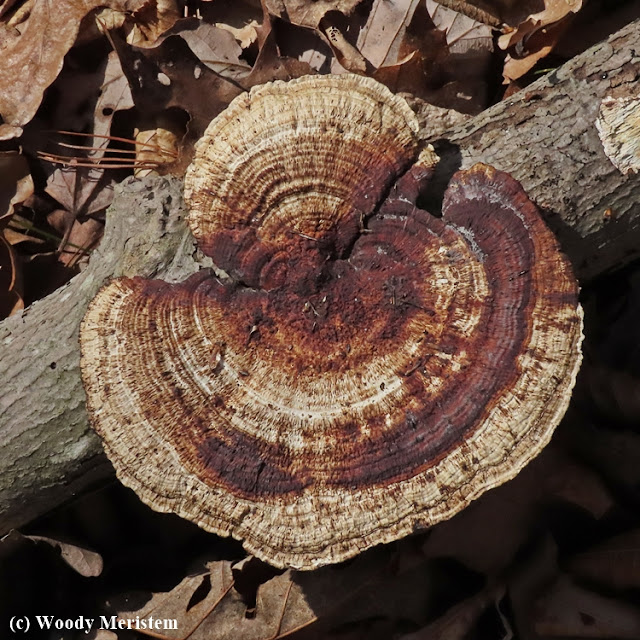 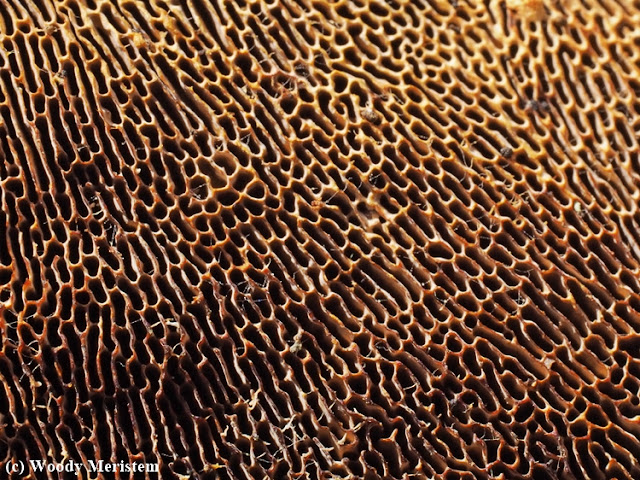 Something else caught my eye, a moss-covered stump upon which lay some feathers – feathers from a downy woodpecker that a hawk or owl had caught and plucked while perched on the stump 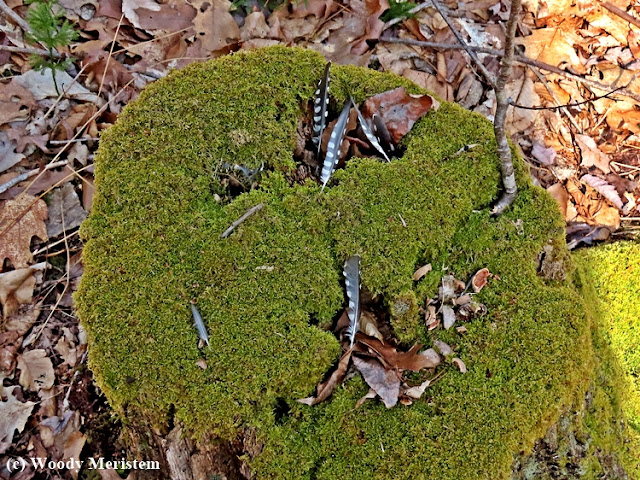 Then it was past the foundations of an 1800s homestead and farm; the crevices between the stones would have been a fine place for the mourning cloak to have spent the winter – 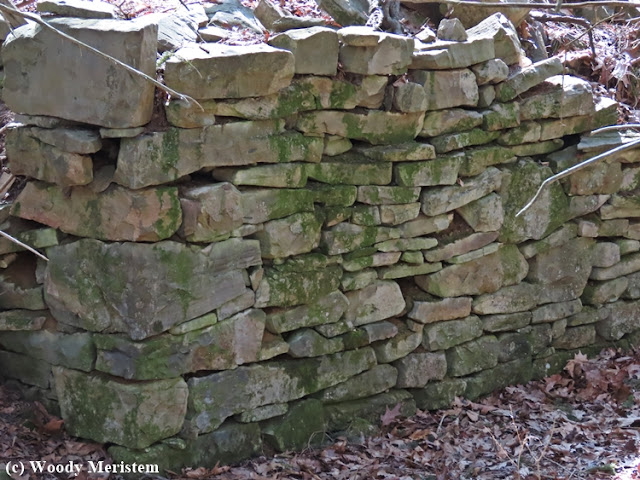 Now we’re down in the valley’s bottom where the soils are moist and fertile and produce an abundance of wildflowers. At the base of a cluster of overwintering leaves of round-lobed hepatica a flower bud was unfurling, protected by a profusion of “hairs” that trap warm air and help keep the bud from freezing – 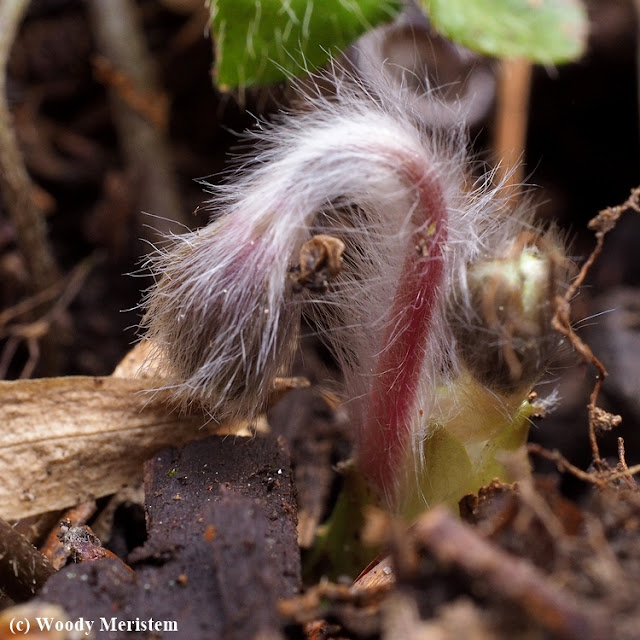 The old road’s now on flatter ground where a roadside ditch held clusters of wood frog eggs covered by beneficial algae, the embryos within plainly visible – 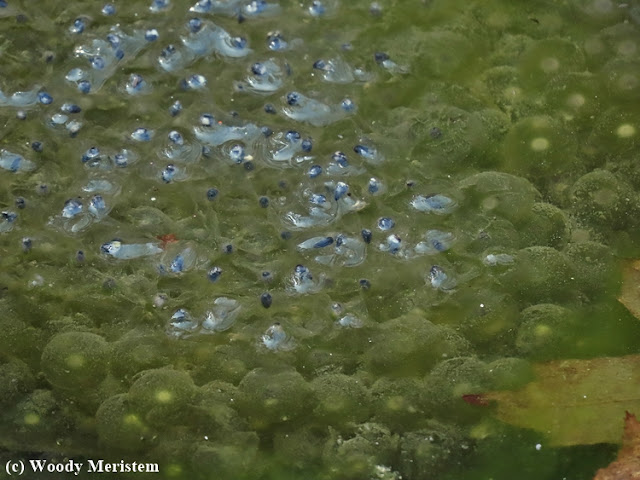 A stream parallels the old road, more correctly the road parallels the stream for it was here first – by several thousand years – 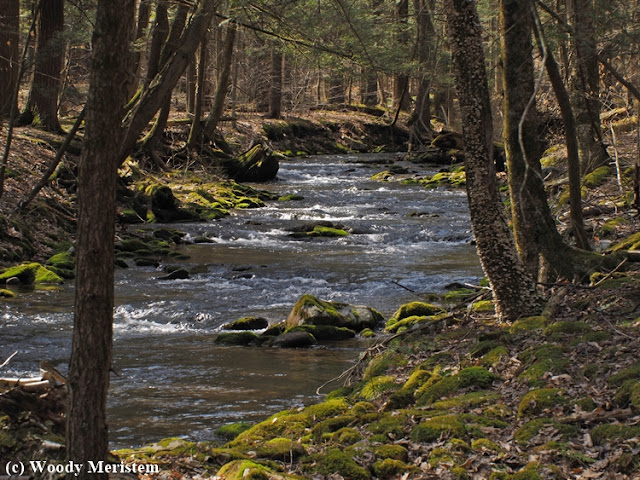 The stream is home to a heritage strain of brook trout, one of which repeatedly rose to snatch small midges – 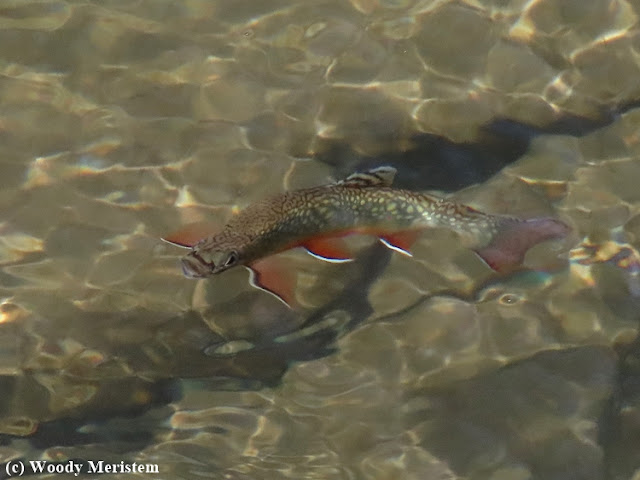 What’s on that log, a butterfly? Nope, a fungus that by happenstance resembled a butterfly – 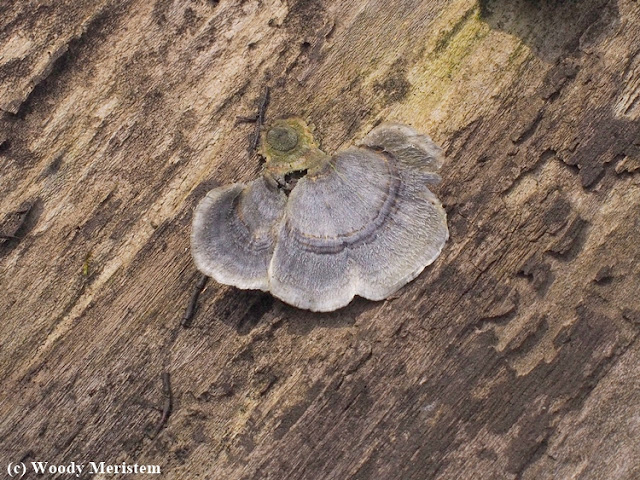 It wasn’t long before a real butterfly fluttered into view, a comma butterfly that, like the mourning cloak, had overwintered as an adult in a rocky crevice or beneath loose bark – 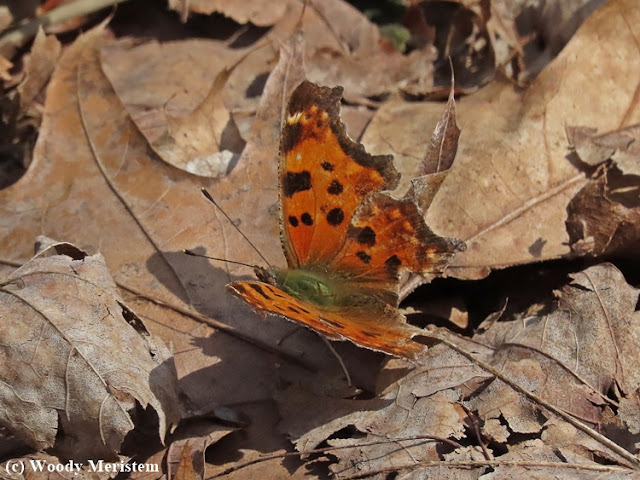 The butterfly repeatedly flew to one spot on the ground, it took me a while to discern the object of its interest – another comma with its wings almost totally closed, this must have been a female and his interest was almost certainly on making more commas – 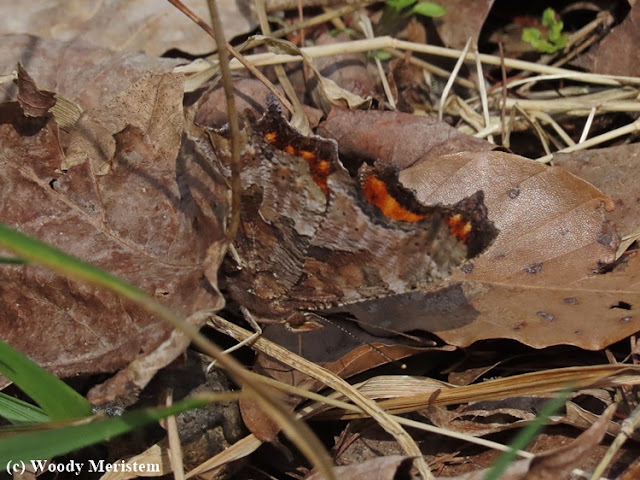 Almost back to my car now and along the old road was an American hazelnut shrub, its male flowers almost all spent, but the small female flowers were still bright red. They’re tiny and require a really close look to find – 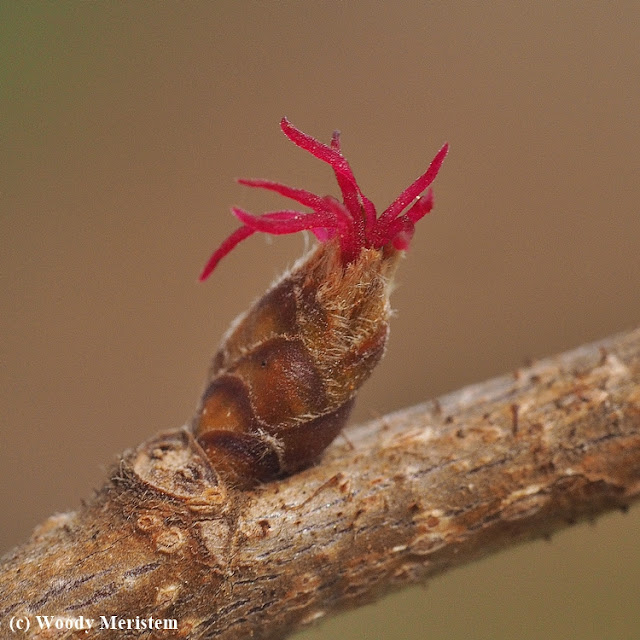 Well, there were no bears or bobcats or fishers to be seen, maybe next time. But there was a lot to see and I certainly missed more than I saw. The bright sunlight made it difficult to get good photos other than in the shade.

Not a bad way to spend three hours of a fine spring morning.

Posted by Woody Meristem at 4:49 AM

You do have the eye to catch almost every little thing out there. Thanks for letting me tag along to see too.

A walk like this would be great at this time of year. And you're very observant!

What a beautiful adventure, with amazing photos! You really scored.

Wow! Your photos are amazing, especially the brook trout. A lovely area to explore, and your narrative describes the hike so nicely. It's as if we are right there with you on your journey.

Hello. You had a wonderful spring morning outing. Thank you for shering.

I would have loved to walk with you. It's amazing what we can see in the small details. And how pretty those feathers are. Thanks for sharing your neat photos!

I like your macro observations. So fascinating and beautiful!

What a marvelous walk, so much to discover and delight in. Thanks for bringing us along to share your discoveries.