It's only certain that I saw him once with my own eyes but there's a good possibility that I’d also seen him a second time ten years later.

The first time was on the morning of May 1, 2005; H called me up from my basement workshop to see a bear at the bird feeder. There it was, a beautiful animal with a bow-tie-shaped white blaze on its chest. 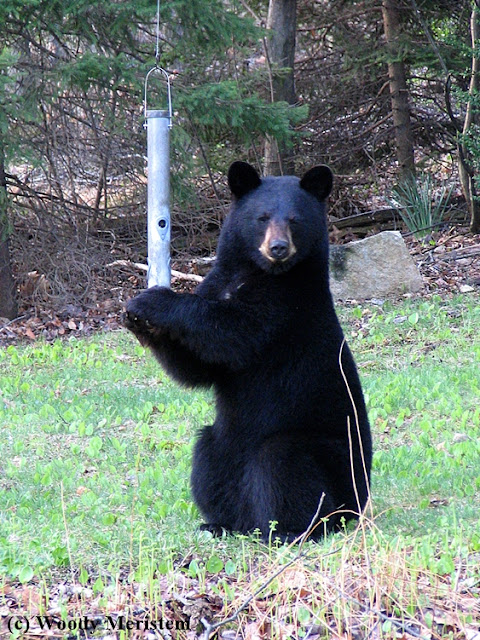 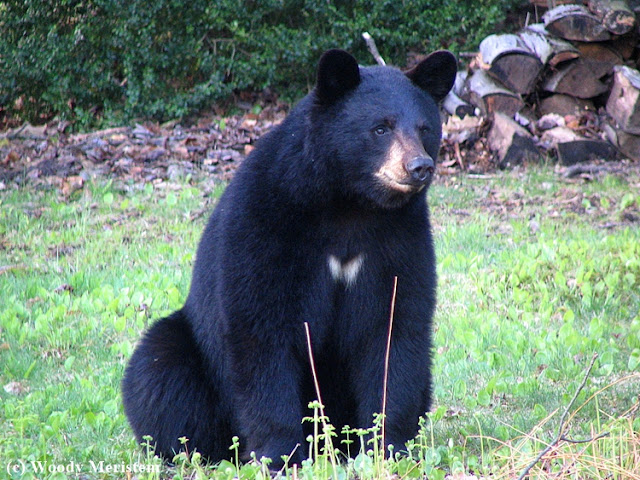 Due to their thick coat of hair, which varies seasonally, it’s very difficult to estimate the weight of a black bear with any accuracy. But my best guess is that the bear weighed about 150 pounds at the time, it was spring and the bear wouldn't have had much time to put on weight after hibernation. How old was it? Perhaps 2¼ years if it was a male and something older than that for a female (some older females are rather small).

The bear left after a few minutes and the feeder went in the garage.

The next time we had any indication that this bear was still in the neighborhood was eight years later on October 27, 2013 when he appeared in several camera trap photographs taken in the backyard. I say “he” because with the passage of time the bear was much larger and had some scars on his face acquired in territorial battles with other males – 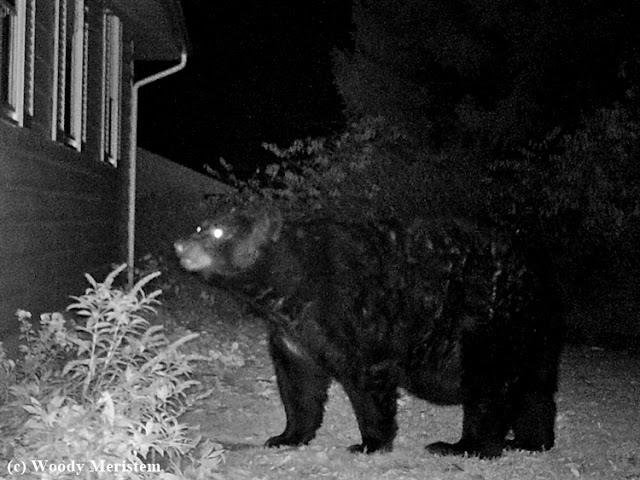 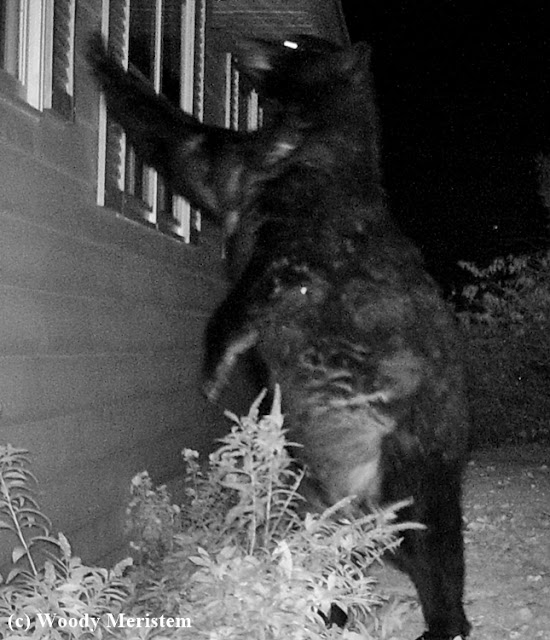 Just another guess, but with the eight years after his first appearance and with the fat acquired before hibernation, he may have weighed 500 pounds – he certainly was rotund. We don’t remember what we had for supper that night, but it must have smelled good to Mr. McChubby.  Without the camera trap photos, we wouldn’t have known he’d visited.

Then on the rainy night of April 8, 2014 what was apparently the same bear appeared in a photo from a camera trap on the hill above the house – 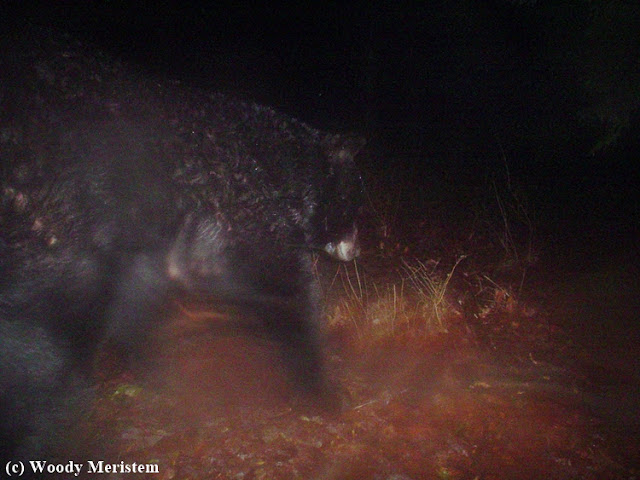 April 28, 2015 – there he was again, in front of a different camera trap on the hill. The camera took a number of photos, most showing his battle scars – 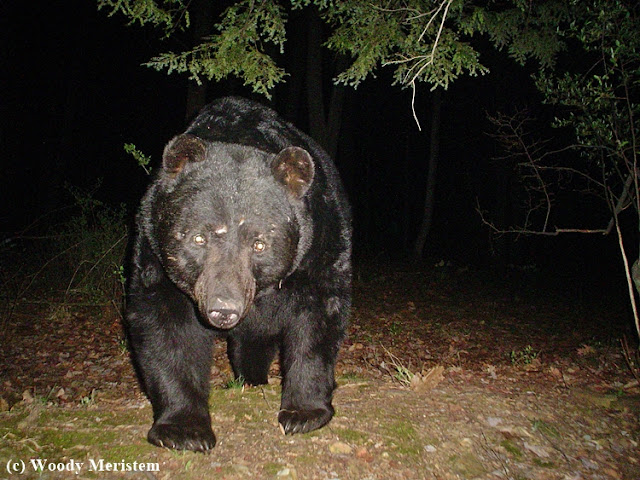 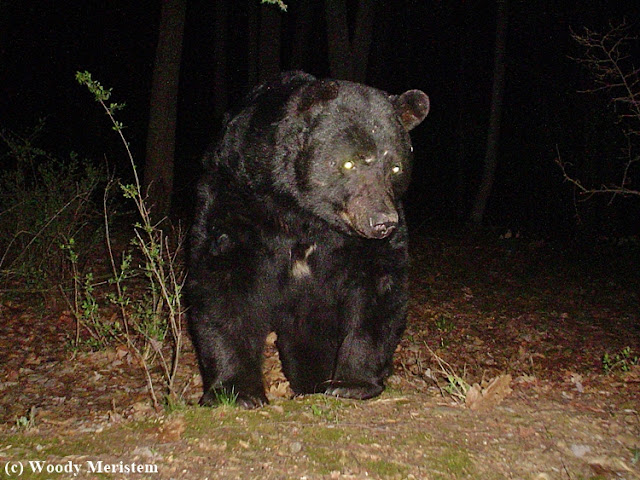 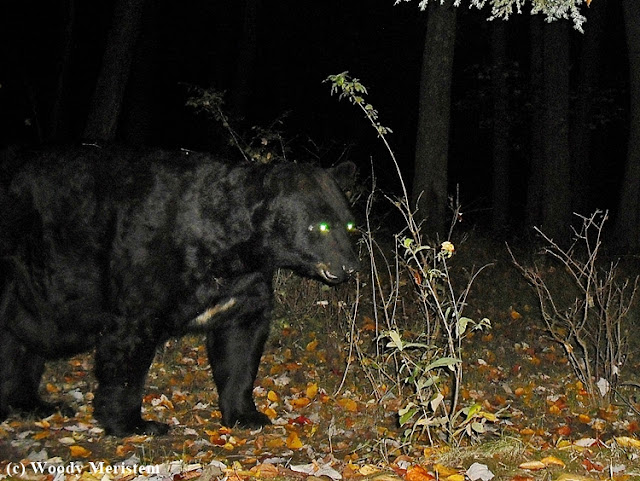 It was also 2015 when I saw what might have been the same male bear on the edge of a field about three miles from the house. To the right of the bear’s right eye is a round scar and to the left of, and slightly above, that eye is another scar. Those scars can be seen in this photo and in several from the camera traps.  Was it the same bear? Quite possibly given the scars and that the distance is well within the territory of a male black bear. 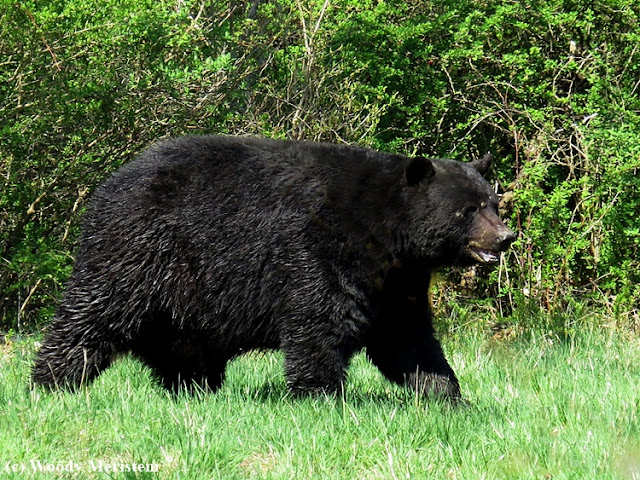 Those were the last photographs I ever got of the bear. Apparently he was shot and killed (not "harvested" as the Game Commission prefers to say) during the 2016 hunting season at which time he weighed just under 650 pounds when placed on a scale at a check station and would have been at least 13 years old.
Posted by Woody Meristem at 5:24 AM

What a saga for that bear.

They are majestic animals.

Worth a Thousand Words

The poor bear.
I love seeing which critters have been here in the dark.

I love seeing the bears, just sad to hear it was killed.

Wonderful collection of bear photos. Thank you for linking up and sharing your post. Take care, have a happy weekend!

Wow! An impressive animal. But don't come near! Saw one many years ago, in Oregon, US. Luckily at the other side of a river.

That was a sad ending to your story but I'm very glad you got some good photos over the years. What a beautiful animal!

Great series of photos. What a shame he was shot...

I so often don't like the end of wildlife stories when we tiresome, trophy-seeking humans are involved. Wonderful photos and recordkeeping. You adding historian to your many talents? I hear we have a bear in our neighborhood here in NW PA. So far the reporting has been that it spends time at the house with the most "toys" in the yard and a few chickens in the coop. I'll be sharing this post with Matt! That bear was a beauty, great close-up photos. Kim in PA

How interesting to have kept track of the bear through the cameras. Great photos but a sad ending.