Is it really a cave? Maybe, but it might also be a place where, many many years ago, someone dug just below the rim of the Allegheny Plateau looking for coal – thankfully they found none. In any event, it’s not very large and at first glance doesn’t seem to go very far. However, on one side of the cave there appears to be an opening deeper into the earth. 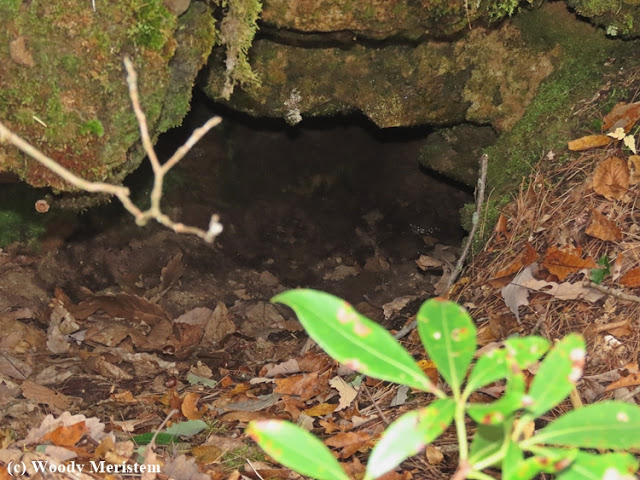 There’s a narrow path, apparently a wildlife trail, leading from the top of the plateau down to the cave. I’ve had a camera trap facing down the trail toward the cave (which is just out of the camera’s gaze) since 2018 and have been generally disappointed with what it’s captured.

The camera took many many videos of gray squirrels, opossums and raccoons which aren’t included in the posted video. Every species that passed the cave’s opening either entered or investigated the opening. Porcupines, opossums and raccoons frequently use similar openings into the earth as dens; eastern coyotes utilize dens to birth their pups and for the first few weeks of the pups’ lives, and black bears often spend the winter in similar locations.

Posted by Woody Meristem at 9:44 AM

Great video and critter captures. The bear and deer are always favorites of mine. Thank you for linking up and sharing your critters and post. Take care, have a happy weekend!

What was supposed to be a coal mine has grabbed the interest of so many critters. Lovely video, liked seeing the bear up close and also the deer.

Patience paid off in a big way! Wonderful vid and fitting music. Appreciate how we get the in-your-face bear visits through your cams. Weird as it may seem, the opposums are often my favorite. They make me smile - every time. Thanks, Woody! Kim in PA