It’s a little known fact, but the earthworms most gardeners and many fishermen like so much are invasive species. Prior to European colonization there were few, if any, earthworms in northeastern North America because the native species had been eliminated by the glaciation that ended between 10,000 and 15,000 years ago.

As our European ancestors arrived in North America they brought familiar plants with them; the soil in the containers in which those plants came also held European earthworms. More recently Asian earthworms have arrived with imported nursery stock. 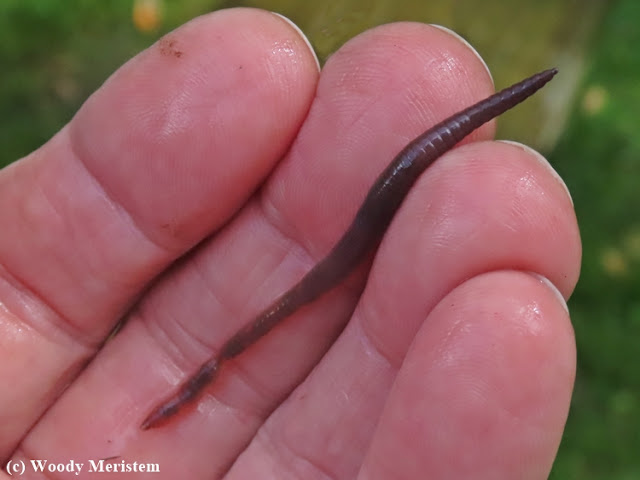 The forests native to previously glaciated areas of the northeast evolved without earthworms and are ill-equipped to survive on soils where earthworms thrive. What’s the problem? ... you may ask. Well, earthworms eat the leaf-litter and organic upper layers of the soil and their castings mix with the mineral soil that is normally found in lower soil layers. Seedlings of many northeastern trees have difficulty becoming established on soils where there’s no leaf -litter and many of the herbaceous plants found in our forests can’t grow in those soils either.

Forests that contain invasive earthworms are often characterized by a lack of leaf-litter, herbaceous plants or tree seedlings, poor tree growth  and an abundance of invasive plants like barberry and Asiatic honeysuckles. Songbirds, insects and small mammals suffer and may vanish as the leaf-litter and small plants disappear.

It’s in one of those unhealthy forests where I placed a camera trap. That camera trap recently captured a video of a barred owl catching a meal. At first the prey appeared to be a mouse with it’s tail dangling from the owl’s beak, but that wasn’t the case. A closer look and a few more videos quickly revealed that the owl was catching earthworms.

The owl was the night shift, followed by a broad-winged hawk on the day shift –

There were many more videos of the barred owl eating worms than of the broad-winged hawk doing the same, but then earthworms are more active above ground at night – hence the name, nightcrawlers.

Posted by Woody Meristem at 7:32 AM

Hello,
Great captures of the Owl and Hawk, they must be tasty worms.
Thank you for linking up and sharing your post. Take care, have a happy weekend.

Hi Woody :) I never knew that earthworms could be invasive and do damage to forests and trees. Thank you for enlightening me!! :)

I've never heard of that before. I remember knowing some woods that had lots of nightcrawlers...big worms good for fishing. I never knew it could be a problem. I love owls so I hope that are eating good!

Oh dear! I was aware of this problem, but I had forgotten or not realized how serious it was. One more issue, along with climate change, gypsy moths, and too many litterers in the woods to make me kind of glad I will probably be dead in 10 years and not have to witness all the devastation of wilderness.