Woodies at the Beaver Pond

Wood ducks, especially the males, are arguably the most beautiful ducks native to North America. They frequent wooded swamps and beaver ponds and traditionally nested in cavities in trees near water. As the old growth forests were cut across the U.S. and Canada, suitable nest sites disappeared; at the same time unregulated, or barely regulated, hunting reduced the wood ducks’ population.

With tighter regulation of hunting seasons and a proliferation of nest boxes erected by state and federal agencies, private organizations and individuals the wood duck population has rebounded. 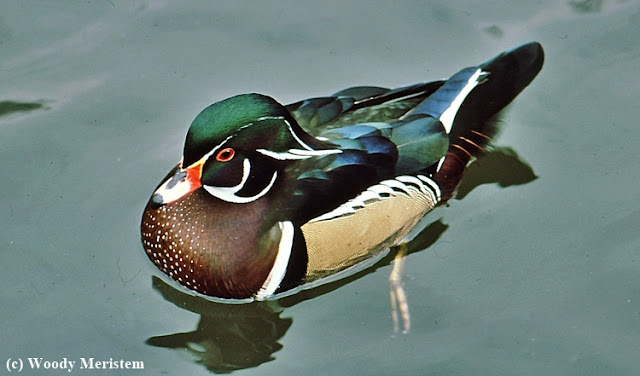 A camera trap on the shore of a beaver pond has captured many species of wildlife, but this spring there have been more videos of wood ducks than any other species. Hopefully you’ll enjoy these videos of our most colorful duck –

There were many, many more videos of wood ducks on the memory card and a few more videos of the black ducks. Black ducks along with wood ducks were the primary nesting ducks in beaver ponds in the northeast, but they are now a species of concern due to hybridization with pen-raised mallards.

Just in case you missed the muskrat, at 2:45 of the video it’s in the far distant background.

The last bird in the video is a second-year bald eagle and one of the most pleasing catches I’ve had on a camera trap.

Beavers are one of the few species of wildlife that deliberately create and alter their own habitat. The ponds that beavers build create an oasis for other wildlife from invertebrates to black bears.

Posted by Woody Meristem at 5:42 AM

The colours and pattern are frankly incredible!

What a wonderful spot! THat tree is handy and the eagle amazing. I saw one fly over the other day. I ran through the house to the back deck to see it, and it was gone!

I think they, and Mandarin ducks, are the prettiest things nature came up with...plus kittens and puppies of course.

Awesome captures of the Wood Ducks and the Bald Eagle. It is a wonderful spot for the wildlife cam. Thank you for linking up and sharing your post. Take care, have a happy weekend!

The Wood Duck is such a beautifully coloured bird. Great to see.

Hello. Wood duck is so gorgeous. Wonderful photo.
Have a nice day.