Although there may be other contenders in various parts of the world, in North America there is no more intelligent bird than the common raven. While in recent decades they’ve been increasingly seen in more settled areas, these large relatives of the ubiquitous, and smaller, common crow are mainly found in places where humans are few (in my opinion a sure sign of their intelligence). 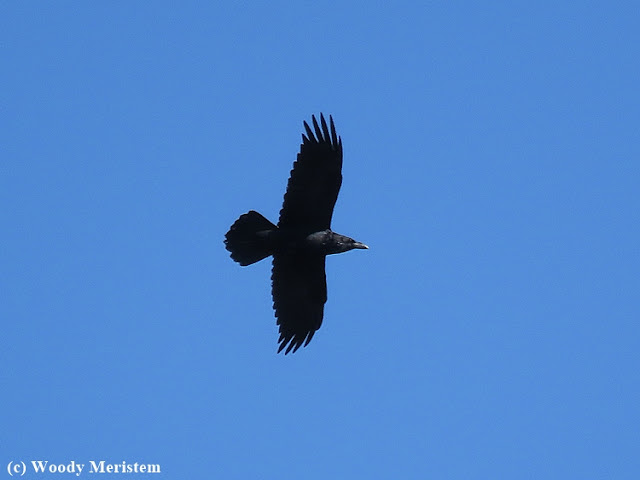 Ravens range from above the tree line in the Arctic south through the boreal forest and in the eastern mountains to northern Georgia, they’re found widely in the west south into Mexico. While ravens seem to prefer to nest on rock ledges, they’ll also nest in tall trees, especially conifers, when ledges aren’t readily available.

Those naturalist’s who live within the raven’s range have almost certainly seen and been entertained by the raven’s aerial antics. Often, especially on a windy day, I’ve watched a pair of ravens do barrel-rolls and loop-the-loops while also, and repeatedly, climbing high into the sky before going into steep dives. At the same time their vocal repertoire of croaks, knocks and squawks (33 different calls have been described) sound from on high – sometimes from so high above that the birds are beyond sight.

Last winter a turkey carcass was placed in front of one of my camera traps. Intermittently over the course of several days ravens visited to feed on the remains. On several occasions snowfalls completely covered the carcass but a pair of ravens knew where it was and repeatedly came to dig through the snow to find delectable morsels.

Ravens are known for hiding pieces of food for future use, an activity to be seen in the video. If they think another bird has seen them hide the food, they’ll move the piece to another location. They will also follow predators and hunters waiting for the scraps from a kill. During the winter in northcentral Pennsylvania ravens will frequently fly along highways below tree-top level searching for road-killed animals on which to dine – presumably they do that in other areas as well.

Ravens are fascinating birds and well worth knowing. Two of the best references on ravens are Bernd Heinrich’s Mind of the Raven and Ravens in Winter.

I don't see them often, but they do nest along the escarpment here.

Great post on the Ravens, they are amazing birds!
Thank you for linking up and sharing your post. Take care, have a happy weekend.

That's what we have so many of here. We call them crows but they are actually ravens! What a good post!

Hello. They are intelligent birds.
Interesting post and video.