Encounter with a Mink

Several weeks ago, early in minks’ breeding season, the beaver pond was entirely ice-covered. Breeding season – that’s the reason two mink were traveling across the ice in the same general direction. 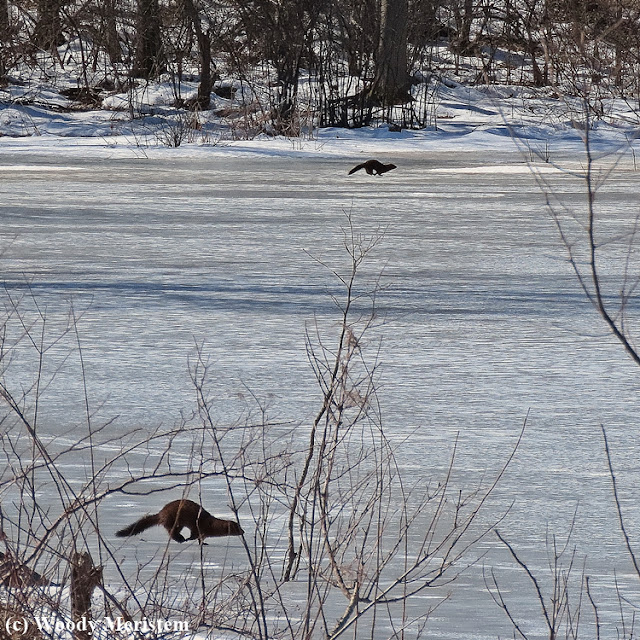 Two males on the scent of a receptive female? A male and female done with their rapid coupling and now going their separate ways? Only the mink know.

A couple of weeks later in the spring and much of the beaver pond was still partially covered in ice. A lone mink ran across the old road that borders the pond – mink don’t do anything slowly – and began exploring among the cattails and sedges edging the pond. Mink are closely tied to water (streams, ponds and wetlands) and partially webbed feet make them good swimmers. Wherever they are, mink are almost always searching for something to eat (a muskrat, small rodent, rabbit, fish, a duck, frog, crawfish, or songbird).

A few squeaks to imitate a small injured creature caught the minks’ attention and on it came. First it was on shore, then crossed a narrow strip of open water covered by a thin skim of ice and onto the sheet of ice – 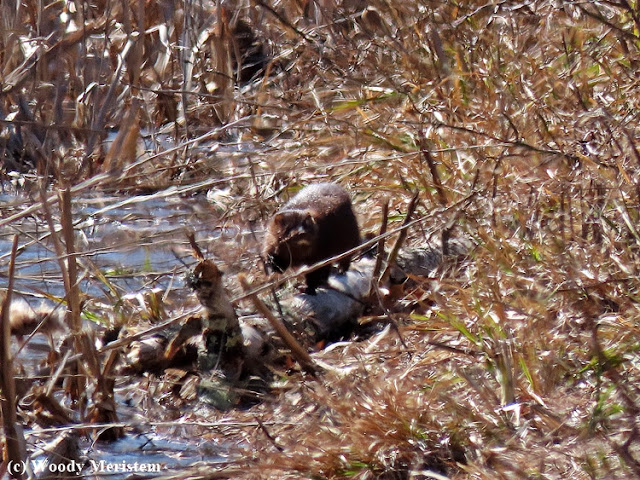 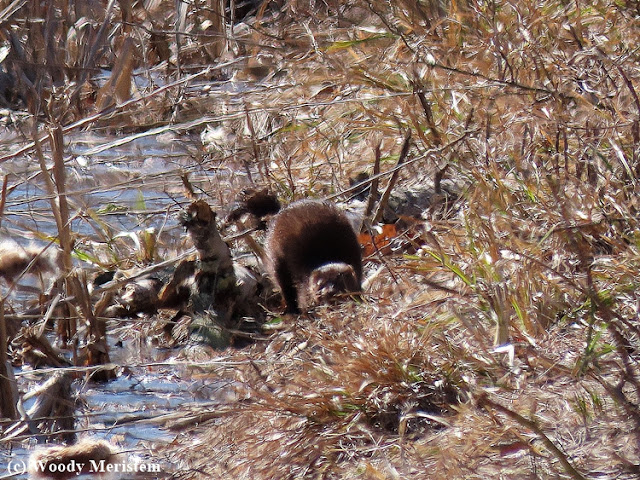 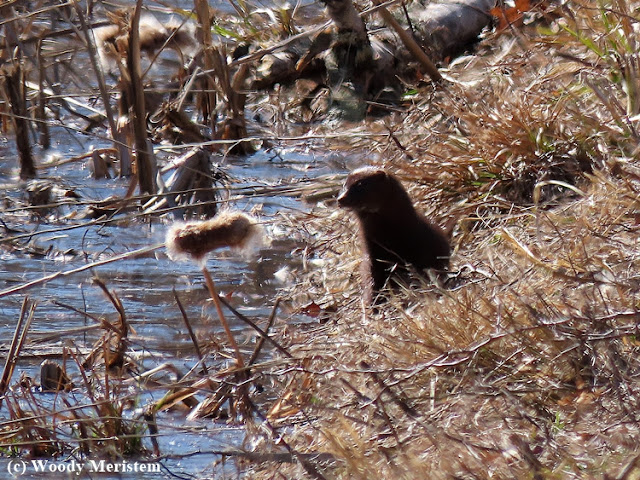 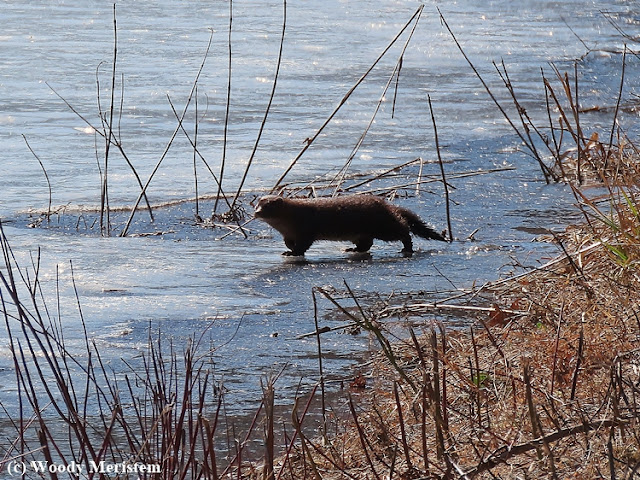 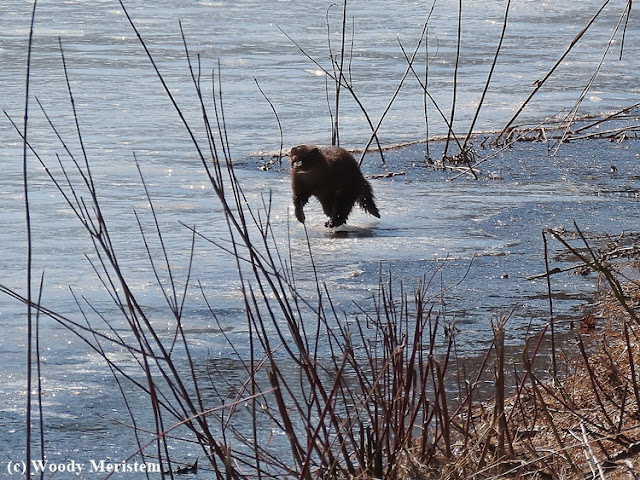 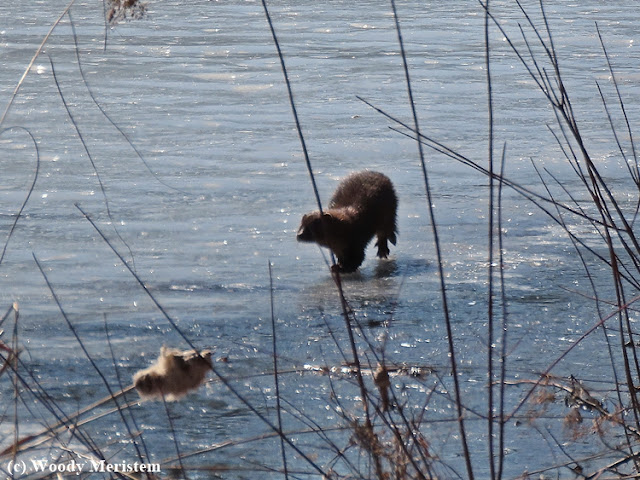 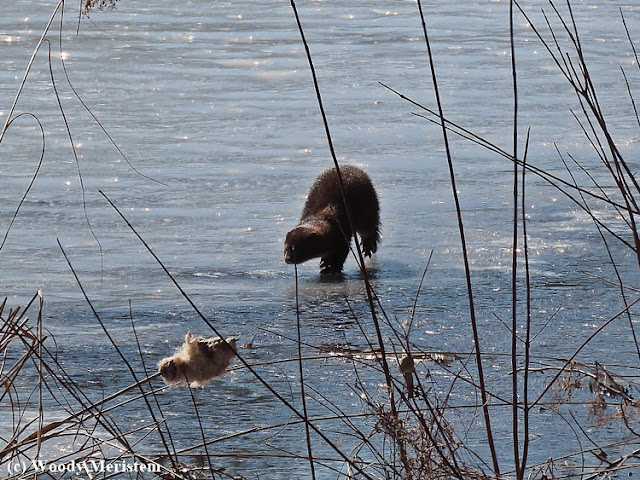 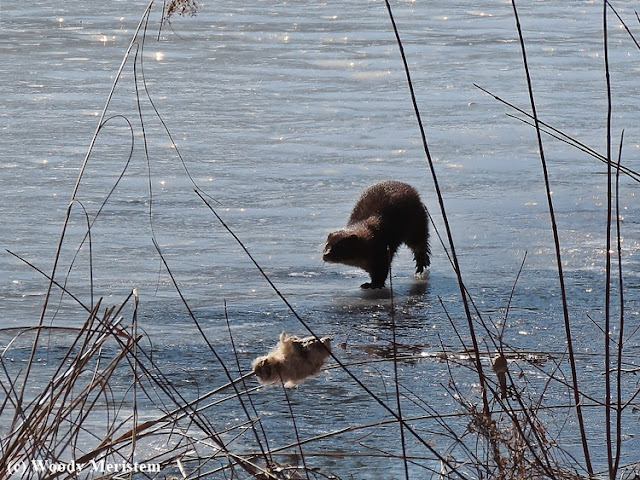 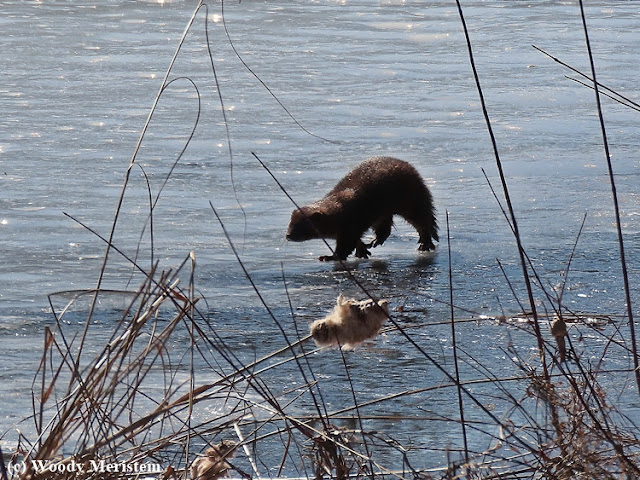 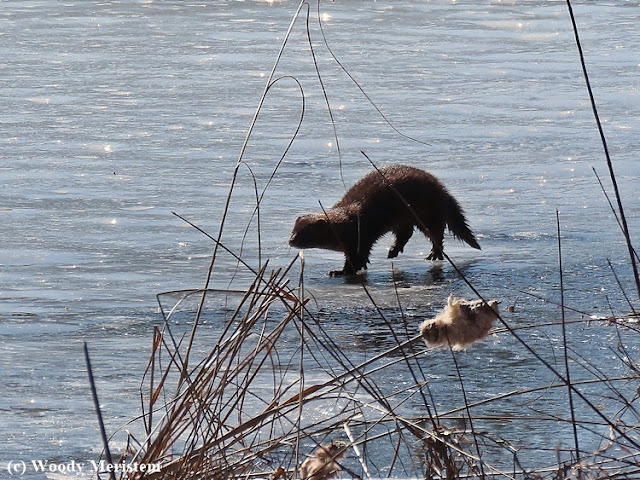 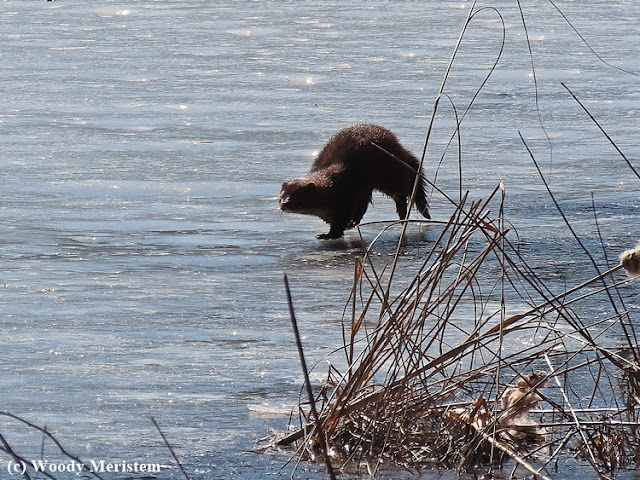 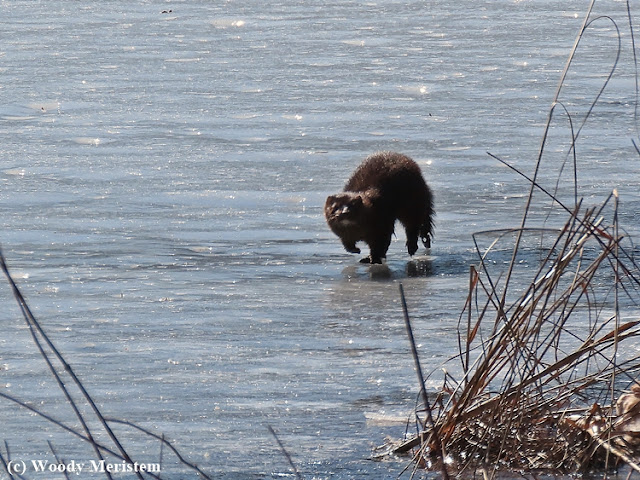 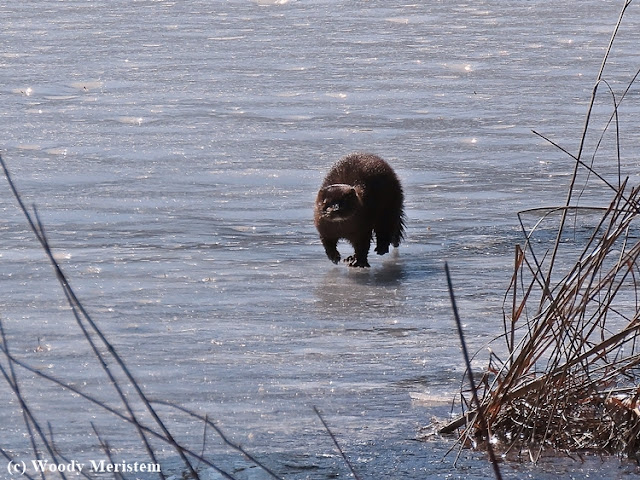 It ran across the ice until WHOA, it slammed on the brakes and stuck it’s nose in the air as it caught the scent of a human – 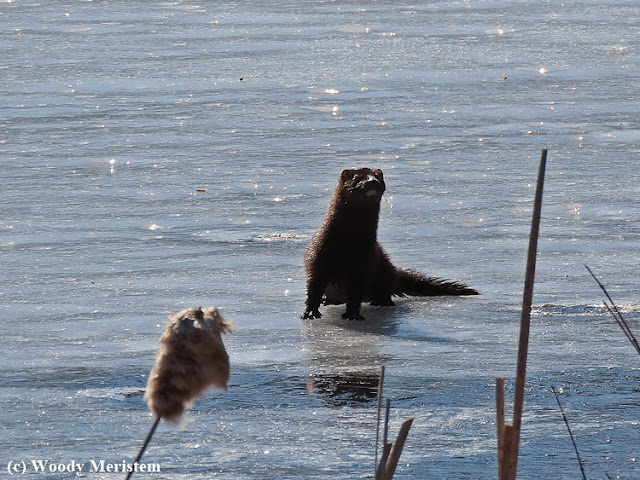 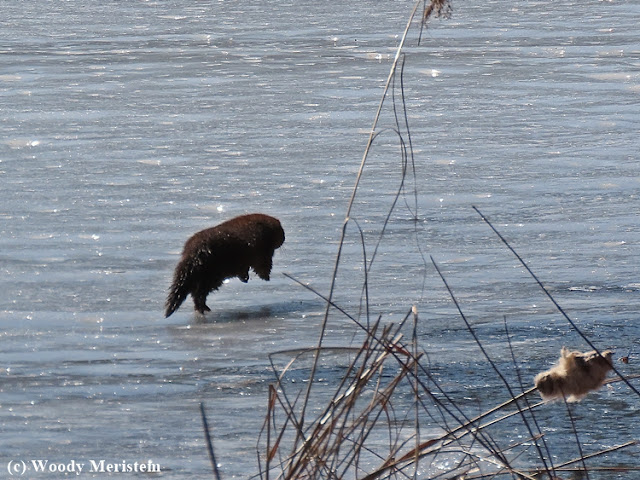 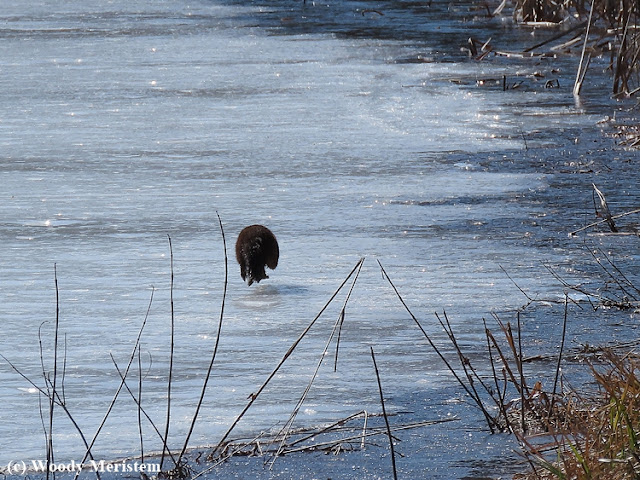 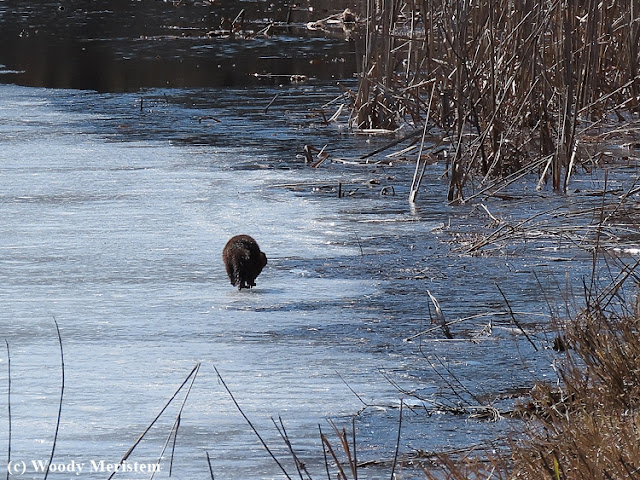 Other times, other mink, they show little fear of humans and may approach to within a few feet – not this time, not this mink.

Posted by Woody Meristem at 7:22 AM

That is so exciting! well done!

Fabulous pictures! I've hardly ever seen one, let alone watched one for awhile.


These are amazing shots of this shy little critter...no longer being raised to have his pelt be worn as a show of affluence by people of the female persuasion.

What a cute critter, fun series on the Mink!
Thank you for linking up and sharing your post. Take care, have a happy weekend.

What a beautiful animal...I've only seen ONE years ago! Love this series of photos! Well done!

Just catching up on a series of your posts. Eagles - fierce - it's in the eyes, sizem and talons. That's what kept running through my mind. And the landing, oh my. You see how we humans were influenced when it came to conquering flight. I learned more about deer, thank you. Seeing the owl was a thrill. Thoroughly enjoyed the exploration of Muncy Hills and the church. I admire how you and H head off and just pick a road. And now the mink. Never saw one close cup - those feet are fascinating. Excellent images all through. You spoil us as you gently educate. Thank you. Kim in PA