Not far from where I sit writing this blog post there’s a small stream. The stream originates in a high valley underlain by sandstone, flows steeply through a narrow rocky gorge and emerges into another valley where it flows into a much bigger stream. For most of its length its a high gradient freestone stream with a fairly low pH – meaning it’s acidic and quite infertile. Beneath its final quarter mile there’s a layer of shale which is much less acidic and the stream is more fertile.

This is the type of stream that's the historic home of the brook trout, the only native trout of the eastern mountains and Pennsylvania's state fish. Except the brook trout isn’t actually a trout – it’s a char, a group that’s different from but related to, trout. 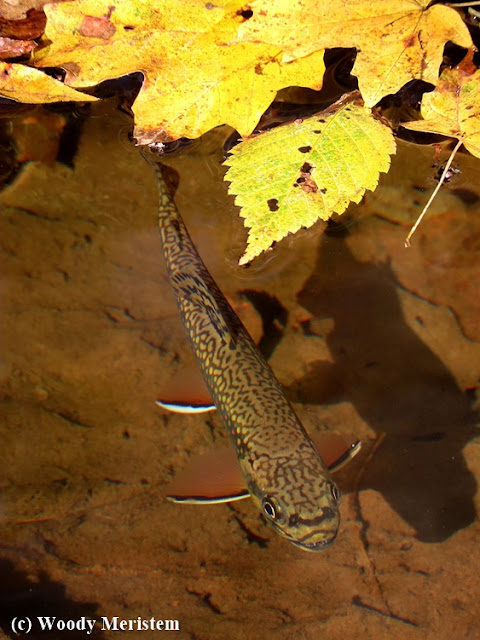 Brook trout require clear cool (below 65°F) water and, in streams such as this, seldom grow to be more than 12 inches in length. This is a heritage strain of brook trout; no exotic trout have ever been released in this stream – no brown trout, no rainbow trout and no brook trout from other streams.

Brook trout breed in the fall and it was on a beautiful, although far too warm, day in early November when I looked into a pool in the stream and saw a pair of trout spawning. 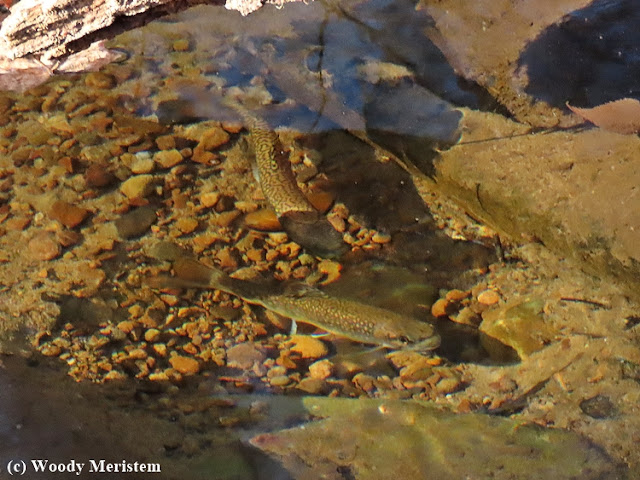 On the stream’s bed was a small area of fine gravel, a suitable spot for the female to deposit her eggs and the male to release his sperm. The female then covers the eggs with gravel.

After spending the winter in the gravel, the eggs hatch in spring; the young fry remain in the gravel until the egg yolks are absorbed, then the small fish emerge from the gravel and begin feeding. Brook trout feed on insects, small crustaceans and small fish. The fish in the video (male darker and more colorful, female smaller with a hollow belly after releasing most of her eggs) were about as large as brook trout ever get to be in this stream, the female about eight inches long, the male an inch longer.

Thus, the strain of brook trout, which may have resided in this particular stream since shortly after the last glacier melted, carries on.

Posted by Woody Meristem at 1:10 PM

A wonderful Post for Our World Tuesday. I enjoyed reading.
...stay healthy and well.

Wonderful capture of fish doing their spawning dances. And after the last glacier melted, just how did the first brook trout get there?

Hello,
I almost missed seeing the trout in the first photo. It blended in well. Great photos and video! Thank you for linking up and sharing your post! Take care,enjoy your day! Have a happy weekend!

Amazing!
Have a blessed day!

Very interesting. I remember a type of brook trout while growing up in Nevada. A very pretty smaller trout. Nice photos.