If you spend any time looking at videos on YouTube or watching certain cable TV channels, you can’t help but stumbling on an abundance of videos or shows on the subject of “Bigfoot”.


“Bigfoot”, “Sasquatch”, “Yeti”, and several other names have been applied to what are reported to be large, hairy, upright-walking apes or ape-like creatures that roam wooded wildlands throughout North America. In their travels the Bigfoots (or is it Bigfeet?) supposedly leave footprints in mud or snow and are said to have been glimpsed by many people.

Why on earth am I writing about this???? It’s because of a set of footprints in the snow that I found along Rock Run in northcentral Pennsylvania – 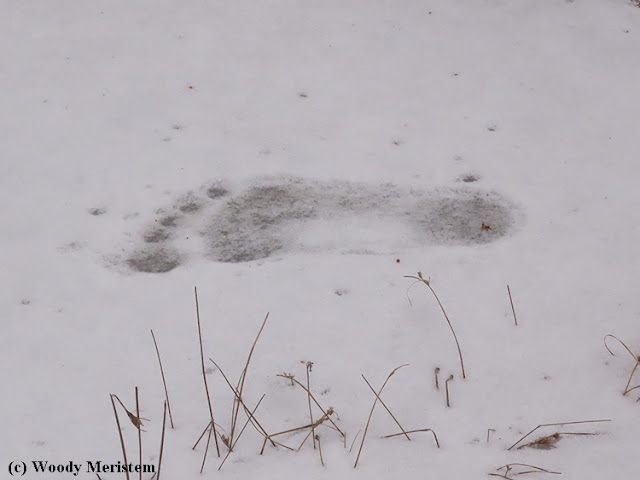 How readily these tracks could be ascribed to a Bigfoot, adding to the abundance of Bigfoot lore. Yup, it would be really easy! But, the tracks have to be considered in context: the photo was taken on January 2; the track was obviously a day or two old; Rock Run is a favorite place for young folks to party; many of those young folks are under the influence of alcohol or other mind-altering chemicals; the tracks were at a favorite swimming hole in Rock Run, atop the large rock outcrop from which swimmers jump into the stream.


So, no the tracks aren’t those of a Bigfoot, just those of someone who apparently, for whatever reason, jumped into the frigid waters of Rock Run.


Some of those other footprints and sightings have clearly been hoaxes – some very crude, some well done.  Others are obvious cases of mistaken identity – under many conditions the footprints of bears’ hind feet look remarkably like a human footprint. Similarly, a black bear standing upright closely resembles the description of a Bigfoot.


It’s a remarkable coincidence (or is it?) that virtually all Bigfoot reports come from within the geographic range of the black bear in North America.


Think about it, if a creature such as Bigfoot actually existed, there would have to be a sufficient number (500? 1,000?) to maintain a breeding population. With that number, a dead individual or bones would have been found, one would have been hit and killed by a vehicle, someone would have shot one in “self-defense”.  None of these has happened! In fact, there is no Bigfoot, not along Rock Run, not in Pennsylvania, not in North America.


The only place any Bigfoot exists is in the minds of people who never really consider how irrational the idea of a large, hairy ape wandering North American woodlands really is.

P.S. If you're a Bigfoot "true believer" don't bother commenting on this post.

Posted by Woody Meristem at 6:24 PM

LOL, it is bigfoot. Great find. Enjoy your day, wishing you a happy new week!