Nope, not the people who, with hook and line or net, seek to catch those aquatic creatures with fins and gills. The fisher in this case is the medium-sized mammal that inhabits woodlands across Canada and the northern states and south in the Rocky Mountains of the west. 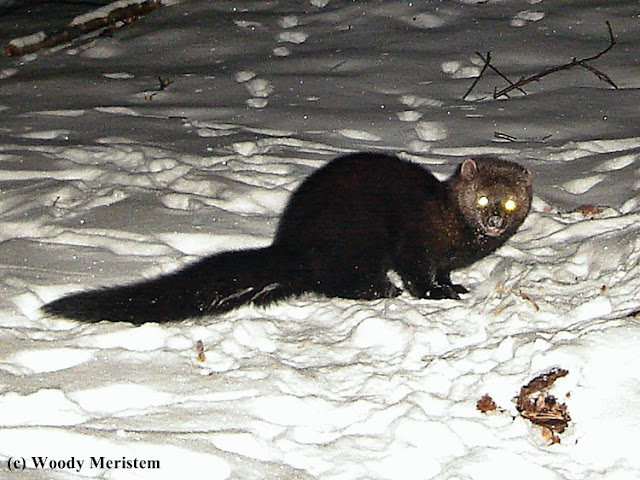 This is the fisher that many people call “fisher cat” – let’s get one thing straight, FISHERS ARE NOT CATS! And therefore shouldn’t be called “fisher cats”. 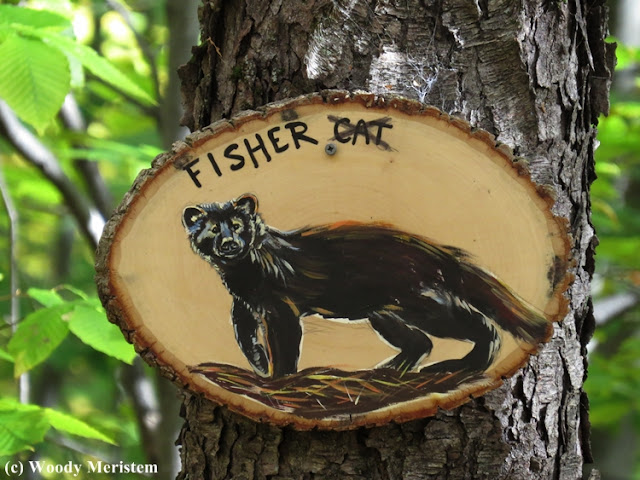 Fishers are medium-sized weasels, bigger than a mink and smaller than a river otter. Male fishers are significantly larger than females, sometimes twice as large. Fishers weigh between four and 16 pounds and are 30-40 inches in length, including their long tails. 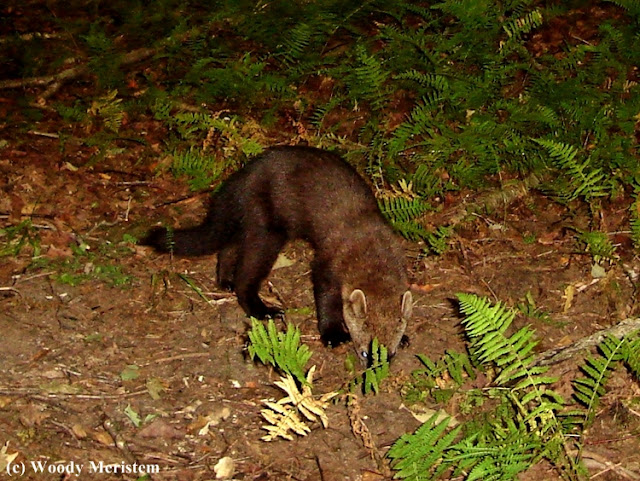 Although they’re primarily carnivores, feeding on squirrels, chipmunks, mice, voles, porcupines, rabbits and carrion, they also eat large quantities of fruit, including black cherries, apples, blackberries and blueberries. Some people are under the mistaken impression that fishers kill deer; although they may occasionally take a newborn fawn, fishers are far too small to kill deer that are more than a few weeks old. Fishers are one of the few predators that regularly kill porcupines, one of which can feed a fisher for four weeks. 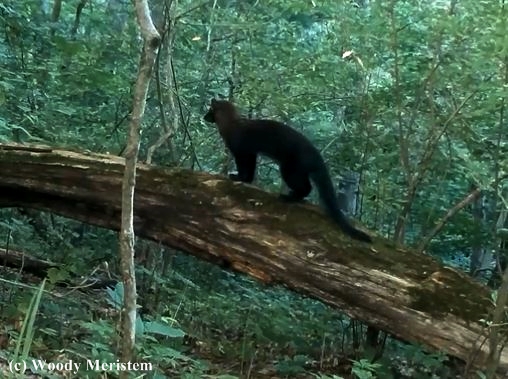 Fishers spend most daylight hours in a den in a hollow tree or among rocks, emerging to hunt at twilight or at night. Females give birth in March or April in a den that is usually high (20’-30’) in a hollow tree. The young are weaned at four months and disperse in late fall to live on their own. 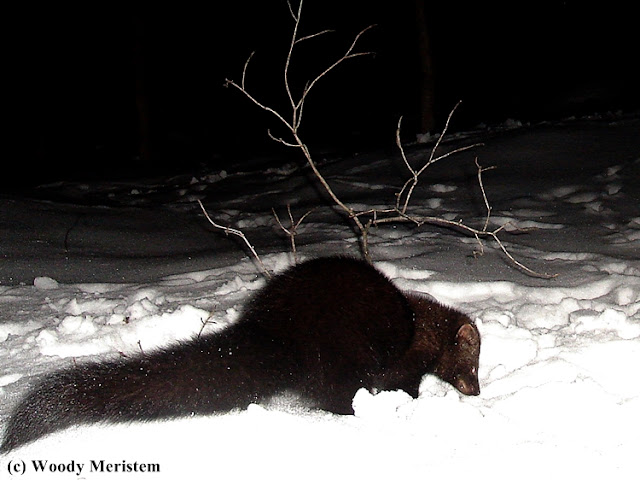 Extensive forested areas of large trees are preferred habitat although one of my camera traps in farm country has repeatedly captured videos of fishers.


Fishers were extirpated from Pennsylvania around 1900 but were reintroduced in the 1990s – they are now found throughout the forested portions of the state. I’m glad to say that I was present at some of the first releases of those reintroduced fishers.
Posted by Woody Meristem at 4:57 AM

I can hardly believe you've actually seen a fisher! Great video, if short!

How wonderful that you have taken such great photos of a Fisher! I know there are many in Saratoga County, NY, where I live, because I see their abundant tracks in the snow, but the only one I have actually laid eyes on was a dead one washed up on the shore of the Hudson River. And I did find evidence once of a Fisher's predation when I found an intact Porcupine hide, all quills intact, lying on the dead leaves in the woods one spring. I had been told that the Fisher can strip the pelt of a Porky all in one piece.

Fabulous captures! I don't see many weasel photos, so this was a real treat :)


My Corner of the World

Great sighting of the Fisher! Wonderful photos and video. Thank you for linking up and sharing your post.

Happy Monday, wishing you a great day and a happy new week!

Wonderful images and footage.
Thanks for the info. I have seen a couple of them here in Montana.

I love walking in the woods. Clean air and silence :) Sometimes meeting forest animals. What more do you need to reset?

So this is the elusive Fisher many here in Ontario are hearing in the woods this winter. It sounds like a boy shrieking (at night in the dark woods!?). They've been re-introduced here too. Thanks for the great photos.

What they're probably hearing are either raccoons or foxes, both of which frequently produce blood-curdling screams. Fishers are virtually silent, only making hissing or growling sounds. Unfortunately, fishers have received a "bad rap" almost everywhere because of an abundance of misinformation repeated by people who have never seen a live fisher in the wild.

Woody Meristem
A life-long naturalist, managing natural and human impacted ecosystems has been my vocation for more than 50 years and I've been photographing those ecosystems almost as long. Husband of a wonderful lady, father of two and grandfather of three, resident of northcentral Pennsylvania.