A raven was perched in a tree long the edge of a winding country road, as the car approached it took flight to slowly fly in a tight circle through the forest. The car came closer and still the raven circled, seemingly reluctant to leave. The car stopped and I opened the window in hopes of getting a photograph of the raven. No such luck, stopping was more than the raven would tolerate and off it went.


But something had obviously interested the bird or it almost certainly would have left as soon as the car approached. And there, on the ground across the creek that paralleled the road something lay in the snow. That something was the carcass of a recently dead raccoon, probably the victim of another vehicle on the country road – 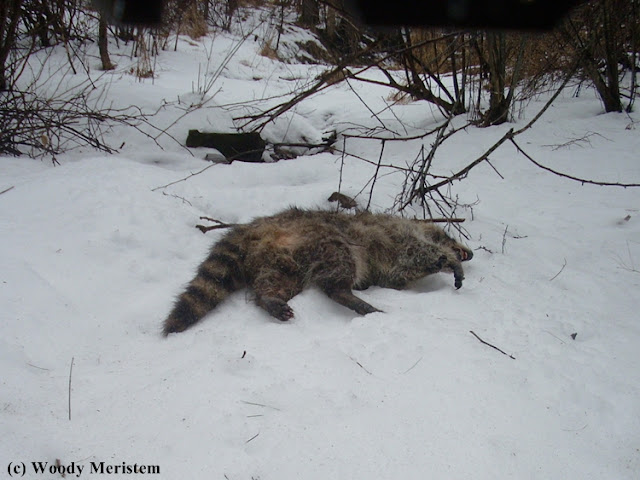 Here was an opportunity too good to pass up. The next day, after another snowfall, I returned to put up a camera trap in hopes of getting videos of the raven and document other species that came to recycle the dead raccoon through their digestive systems.

Several weeks later I returned to check the camera; snow had fallen on several days and partially melted on others and had finally completely melted. The raccoon’s body had been reduced to scattered bones with bits of flesh attached, and the camera’s memory card, containing 621 videos, was full. Since you don’t want to watch more than 600 videos, here’s a sample of the best –


The animals and birds that appeared in the video: southern flying squirrel, red fox, raccoon, white-footed mouse, fisher, red-tailed hawk, common crow. And – No the raven never returned.
Posted by Woody Meristem at 2:40 AM

Fascinating assortment of diners. The fox that scent marked was a bit inconsiderate. Very surprised the raven didn't return when the coast was clear.

Hello, great video. I like the fox! Thank you for linking up and sharing your post. Happy Saturday, enjoy your weekend.

Well done. Mine have been pretty quiet lately.

The Red Tailed Hawk images are superb! How great to capture it.

My hubby and I watched it together...oh my! How incredible! The Fisher was our favorite but the fox was neat and so was the hawk! Just amazing videos. You did good!

Amazing! I never knew that raccoons would cannibalize one of their own species. But then, why not? Every critter is hungry in winter.