White-tailed deer, in spite of their somewhat delicate appearance are actually pretty tough animals and can often survive serious wounds and injuries. That toughness is apparent in a white-tail buck with an injured left front leg/shoulder on which he cannot put much, if any, weight. He was a relatively mature buck when he was first caught by a camera trap above the house, limping along as he dragged that injured left front leg.

The buck first appeared in November 2013 and I posted about him in January 2014, February 2014 and November 2015. He’s disappeared each spring, or at least hasn’t been caught by a camera trap, and then reappeared in the fall. That he survived the winter of 2014-15 with its prolonged cold in view of his injury was surprising. Each time he’s disappeared we figure we’ll never see him again – perhaps shot by a hunter, taken down by free-roaming dogs or a coyote, struck by a vehicle, or having succumbed to the cold and snow of the winter.

This so called “winter” was pretty mild – never more than a couple of inches of snow on the ground at any one time and only a few days of temperatures below 10° F and most local wildlife had a pretty easy time. And so, it wasn’t as amazing this time that the injured buck has reappeared; it's probably due to the easy winter that the injured white-tail buck is still alive.

The buck appears to be in better condition than some other deer we see near the house. Here he is, without his antlers, as he was caught on a camera trap in early March. As he passed the camera trap, he was moving slowly giving the camera time to take three photos while he stopped to bite off a twig to eat – 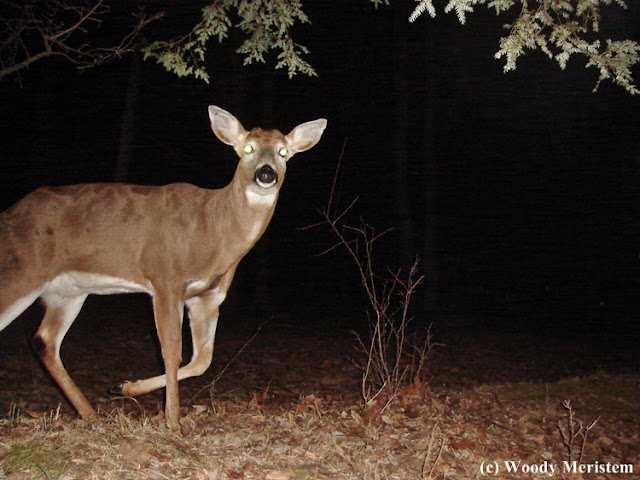 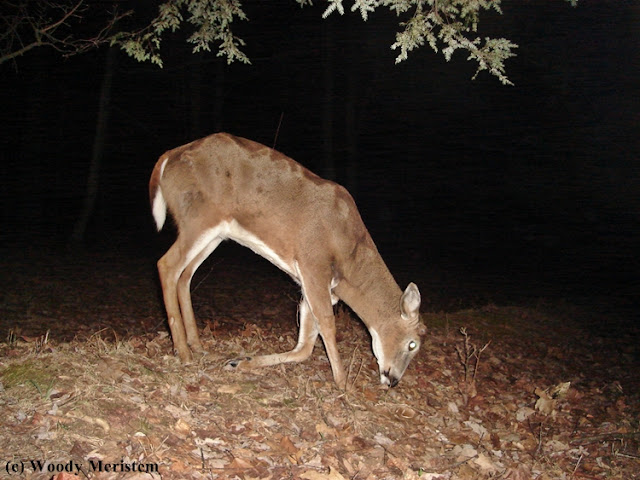 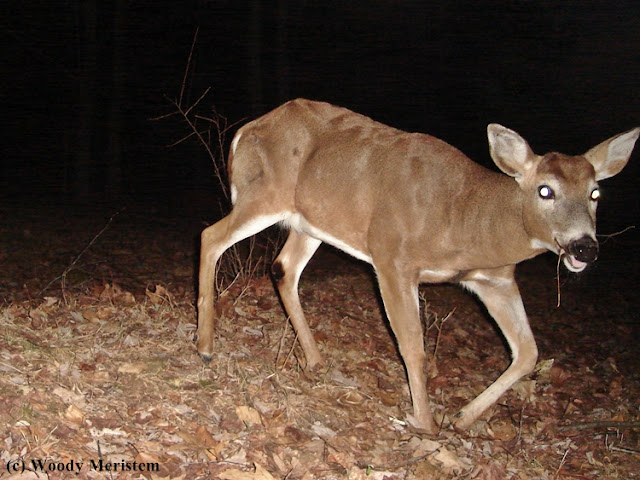 Only once have we ever seen the buck in daylight, so we’ll have to rely on the camera traps to tell us if he survives the summer.
Posted by Woody Meristem at 5:21 AM

Hello, awesome photos of this sweet deer. I am glad it is still living, I hope the leg is healing ok. Thank you for linking up and sharing your post. Have a happy weekend!

Hope he visits you safely again soon. have a good weekend :)

Wonderful to be ableto keep track of them. Lovely shots. Have a great week ahead.