Back in the mid-1970s a friend of mine was in charge of cleaning out the building where he had his office before he, and the rest of the staff, moved to a new building. They were throwing away a large quantity of old unused “stuff” among which was an unlabeled film can.

As I remember, he said the can made it into the trash before he decided to see what was inside. After retrieving the metal can he opened it; inside was a reel of 16 millimeter film, again with no label. Since the office had a 16mm projector he decided to run the movie and see what it was before tossing it back in the trash.

What he found astonished him and those of us who saw it soon afterward. Apparently it was the sole existing copy of a film made in 1926 by an employee of the Central Pennsylvania Lumber Company (CPL) at Sheffield, Pennsylvania. The movie was of the entire operation from the uncut old growth forest through loading the lumber into railroad cars for shipment.

At one time CPL owned approximately 2,000,000 acres of forest, most of it old growth, in the northern part of the state; the company constructed or purchased a number of sawmills and towns throughout northcentral and northwestern Pennsylvania (Laquin, Masten, Grays Run, Jamison City, Leetonia, Norwich, Tiadaghton, Sheffield) and operated dozens of geared locomotives on hundreds of miles of logging railroads.

The sawmill at Sheffield featured in the movie was constructed in 1907-8 and operated until 1941 when the last log was sawn. It was the largest sawmill ever to operate in the state, and it’s one-day record was over 337,000 board feet (a board foot is the equivalent of a piece of wood 12 inches long, 12 inches wide and one inch thick) sawn in ten hours.

Fortunately I managed to obtain a DVD of the original movie (which was made almost 100 years ago), have been able to improve the exposure and contrast a bit, (but not much, especially the first few scenes), added some music and included the film in this post. It’s a bit over 20 minutes long, so sit back and view a piece of history –

CPL was typical of many lumber companies of its day – when the timber was cut the land was of no further use to the company and was sold. Most of the land logged to supply the mill at Sheffield became the Allegheny National Forest. In other parts of the state, hundreds of thousands of acres were added to the Pennsylvania state forest or state game land systems, some is now owned by other forest industries, and a number of tracts became large private hunting and fishing clubs.

While CPL and other companies cut vast acreages of old growth forest in Pennsylvania, there are still isolated areas that have never been logged; some are as small as 10-20 acres, others cover thousands of acres. 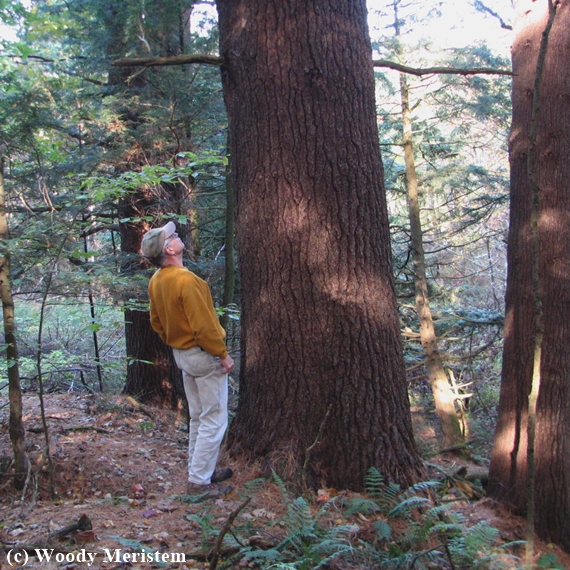 If you know where they are, you can still walk amid a forest that looks like the ones the old loggers saw.

Posted by Woody Meristem at 4:47 AM

What a find! That old film must have been sending out signals to you to take a look at it.