Elk in the Afternoon

It was a beautiful morning with a forecast of a beautiful afternoon as well. So I said to H: “Would you like to go see some elk this afternoon?” “Sure” said she. With that we loaded the car with boots, snacks, several water bottles, sandwiches with accompaniments for supper – and off we went. Stopped along the way to pick up lunch at one of our favorite places (no indoor eating – thanks to COVID) and then continued our journey.

Early in the afternoon we got to one of the best places to see elk, and there they were, we could see 18 on a far off hillside –

We drove as close as we could get on an old road with protruding rocks and a few small gullies. Where the road was gated, it was time to walk uphill on a continuation of the road. Closer now, there were still elk near where we'd seen the 18: cows with this year’s calves and a few bulls –

Closer still were some elk that had been hidden from view; they were bedded down chewing the grasses and forbs on which they’d been feeding earlier – 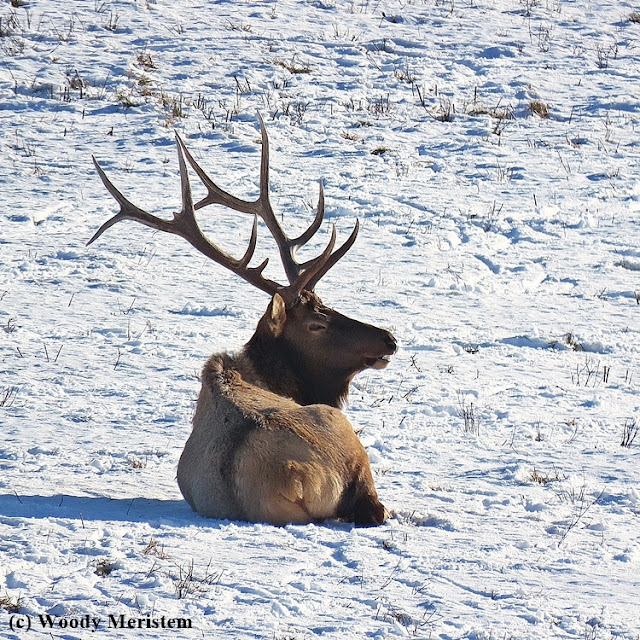 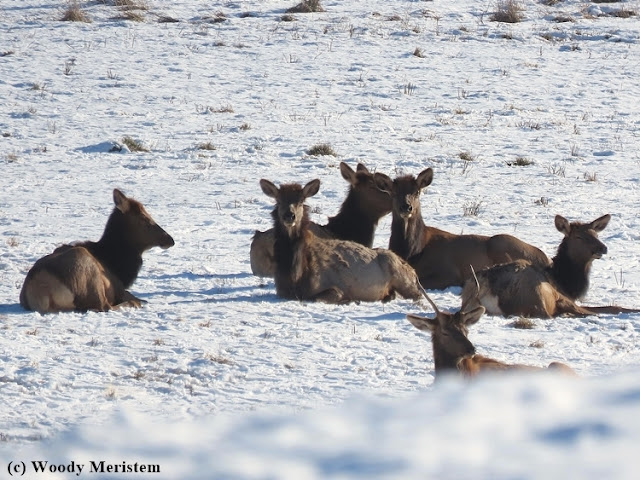 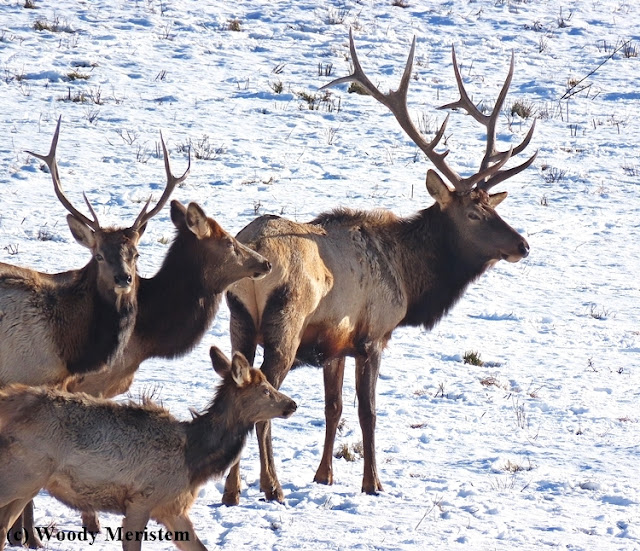 After a few photos and not wanting to stress them further, it was time to head back down the hill. We drove to several other areas looking for more animals and found another band along a fencerow at the edge of a field. That band was on the move, walking down across the field, occasionally stopping to feed and coming ever closer – 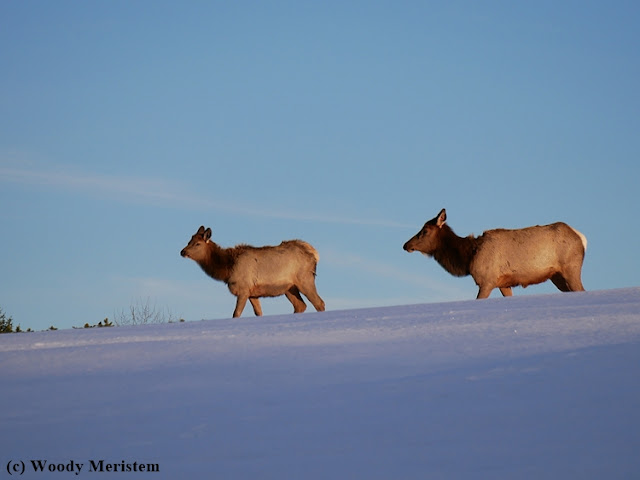 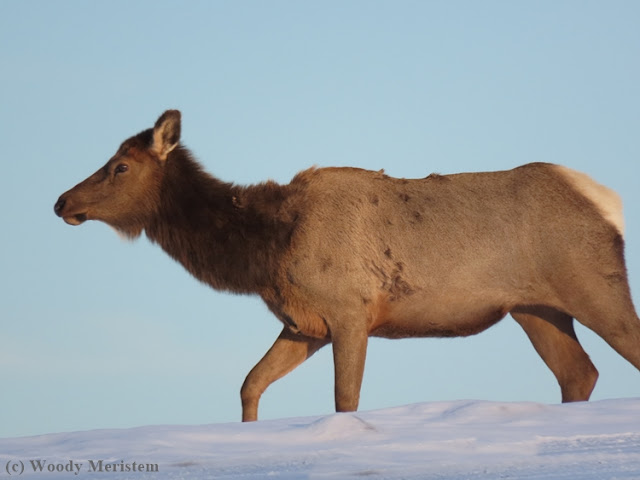 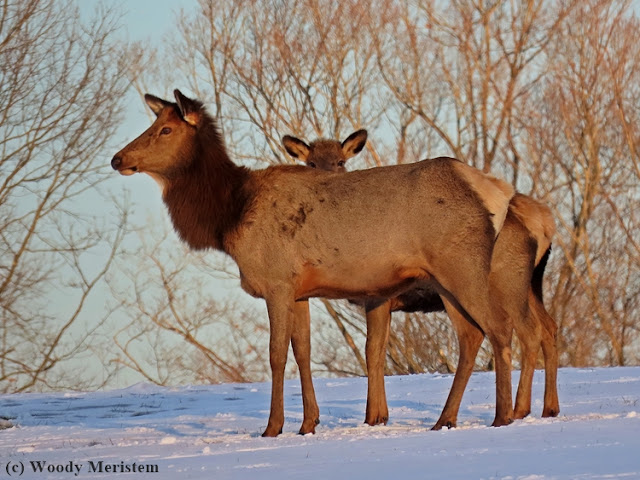 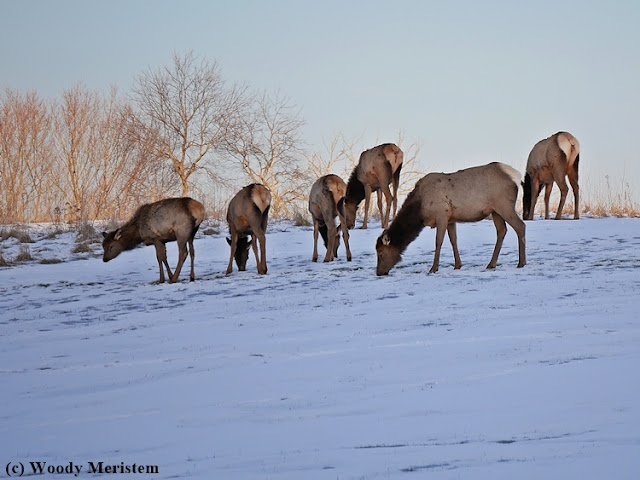 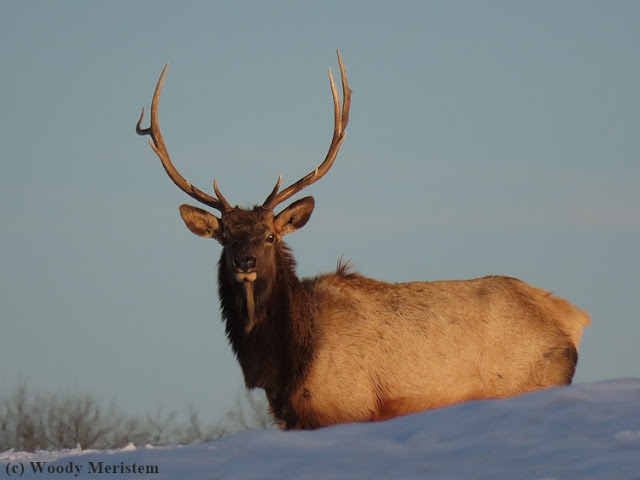 One cow that was wearing a radio collar stopped and her calf, which also had a radio collar, proceeded to nurse. Apparently Mom was quite willing to tolerate the calf’s nursing because the calf continued for quite a while with much head-butting (called bunting) to release more milk – 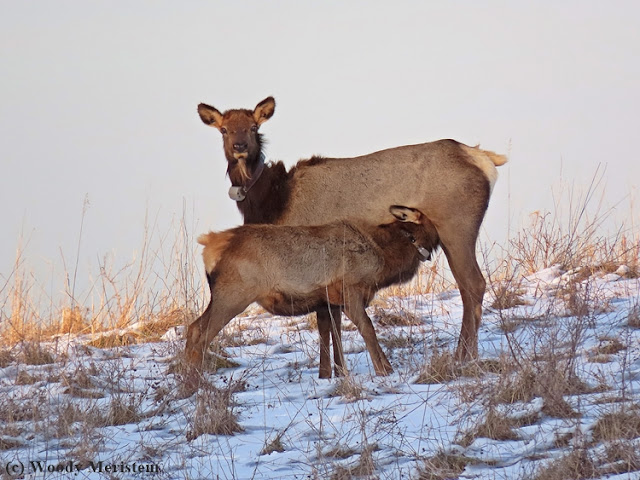 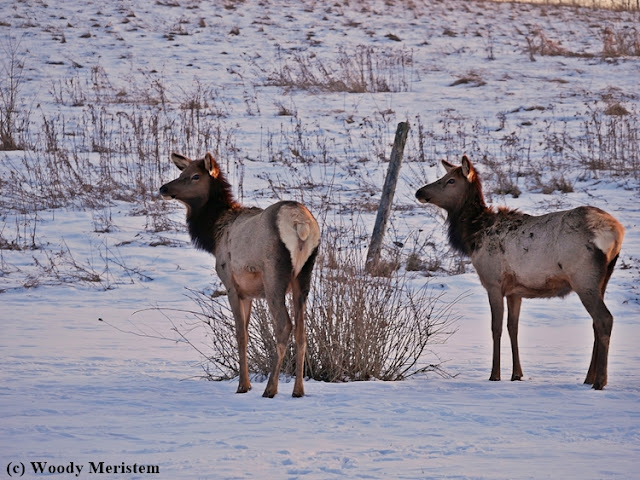 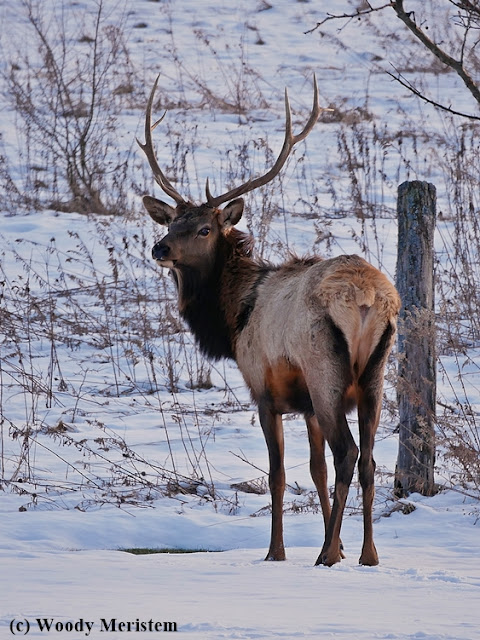 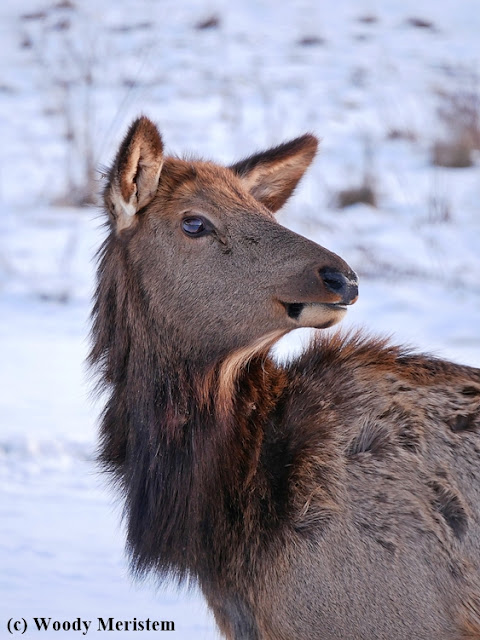 We were still watching the elk when the sun dropped to and below the horizon, producing a beautiful sunset – 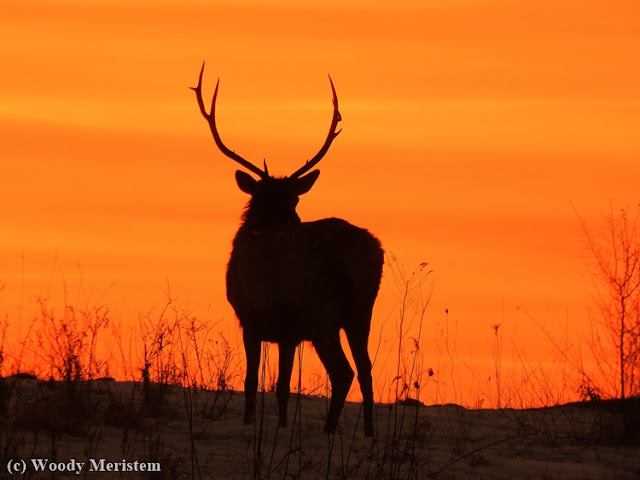 As night set in it was time to head for home. We drove down along Sinnemahoning Creek and found a band of bulls in a field, some were larger than any of the elk we’d seen earlier in the day and barely visible in the deep valley's darkness (although there was still a red-orange glow in the western sky). Fortunately, one of my cameras is really good at capturing images in poor light, not high quality photographs – 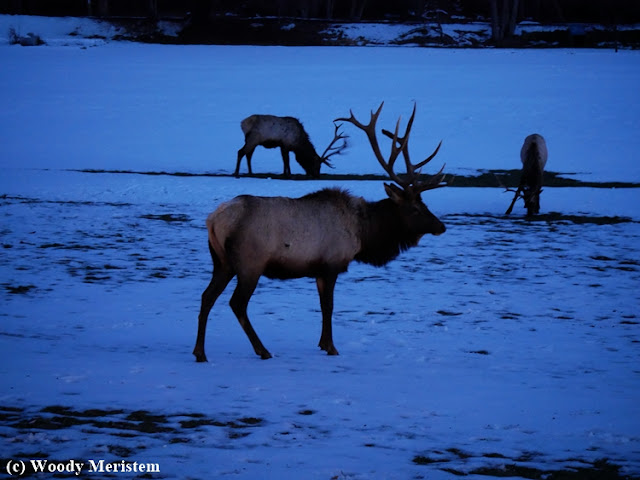 But after some editing and a little cropping on the computer, good enough – 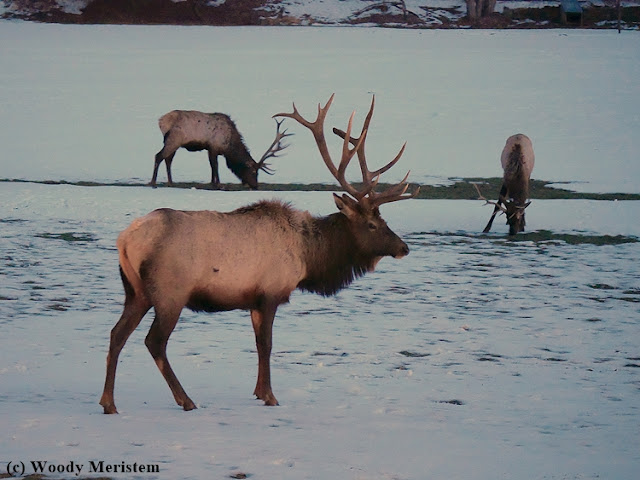 One of the smaller bulls in the group went from one of his companions to another, challenging each to spar a bit – 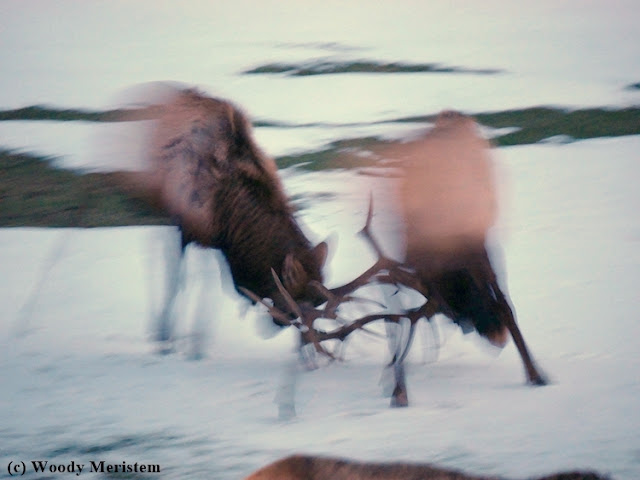 Homeward bound, passing a few white-tailed deer at  the road's edge, other deer looming out of the darkness as they stood in the road – resulting in frequent application of the brakes! Got home in time to quickly download more than 500 photographs to edit the next morning and have dessert: a glass of milk and a few cookies – a tasty end to a great afternoon.
Posted by Woody Meristem at 4:35 PM

These are amazing photos! I'm so glad you decided on an adventure for your readers!

wonderful photos...I'm so happy that camera was able to capture so much detail in the post-sunset shot. Thanks for the great photos of these beautiful beasts.

Wow! Great photos! Thank you for sharing your adventure

Amazing photos! I found that creek, so I know approximately where you were. Love to know the history behind the elk in
Pennsylvania.

F.G., My old friend, Ralph Harrison, recounts a lot of the early history of elk in Pennsylvania in this video -- https://www.youtube.com/watch?v=cmjZWg39QCA&pbjreload=10

Sadly, Ralph passed away a few years ago and a lot of information on the elk was lost. For many years Ralph knew more about Pennsylvania's elk than anyone else, he was my guide and mentor about all things elk. Ralph hated the tourism aspect of elk management and what was happening to Winslow Hill in the last few years of his life (as do I).

What a neat day of elk viewing. Enjoyed your photographs.

Seeing these large and impressive animals must really be exciting! I thought they lived only in the western states, so I’m interested that they are in PA — or are these introduced/farmed?

be safe... mae at maefood.blogspot.com

Wow, cool captures of the elk! The photos are awesome. Thank you for linking up and sharing your post. Take care, have a great weekend.

A perfect day! You sound like us...we pack for a day outing! But it's nice to have those snacks and sandwiches and water. LOVE your photos. Of course the orange sky is breathtaking but I love seeing the little one nurse too! Just beautiful! A perfect day...oh I said that!

You get wild ELK where you live?!!! I remember seeing some when I was a kid (1940s) in southern Michigan, but I think it was a game farm.

Hi Woody! Amazing photos as usual. I loved that elk in the sunset, just amazing. So happy to see your post because I don't see elk around here! :)

Isn't it wonderful how you can save a mediocre digital photo? If not good enough for 300dpi printing on paper, it's good enough for the web! Those of us who grew up on film feel so spoiled now

These pictures bring back great memories for me. The first time I ever encountered elk was in Estes Park, CO where they wandered up and down the street, and rested on people's lawns - one even up on the porch. Not your usual wildlife encounter. A couple of days later I had a more "normal" experience in Rocky Mountain National Park. They are magnificent animals.