A tale – about those critters with a wide flat tail.

Thick gray clouds were hanging low in the sky on a winter morning and a light mist of snow was falling – the day before had been the coldest day of the winter.

There’s a nearby pond that has been a home for beavers off and on for 40 years. The beavers move in, build a lodge and establish a colony. After a while they either eat all available food and move on or, if the price of beaver pelts is high, they’re trapped and eliminated.

A year or so ago a pair of beavers moved into the pond once again; they cut willow, aspen, red maple and silky dogwood to eat the bark and uprooted pond lilies and cattails to feed on the thick starchy roots. The beavers built a small lodge against the bank over what had probably been a bank burrow that they created when they first moved into the pond. Beavers in large rivers usually live in bank burrows, but this is a small pond of about seven acres so the beavers quickly began to construct a traditional lodge of mud and the branches and stems of trees and shrubs.

Late last summer and throughout the fall the beavers created a feed bed of branches from trees they had felled, dragged into the pond and sank next to their lodge. The feed bed supplies most of their winter food – if they’ve stored enough. If there’s not enough food in the feed bed they have to venture above the ice and struggle through the snow and find more food. As is usually the case, some branches in the feed bed stuck above the water – 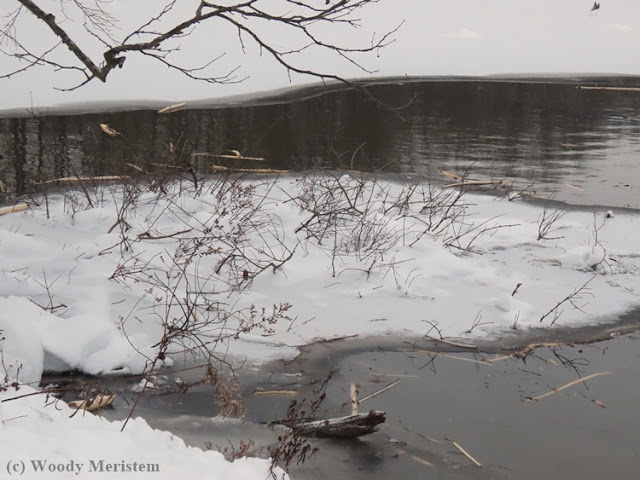 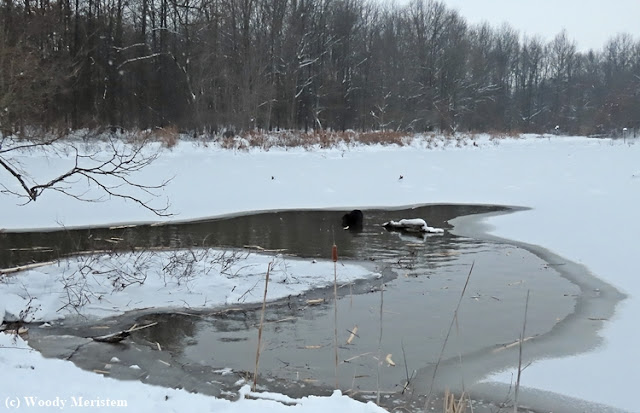 A beaver swam around in the open water then climbed up on a tree that had fallen into the water years ago. 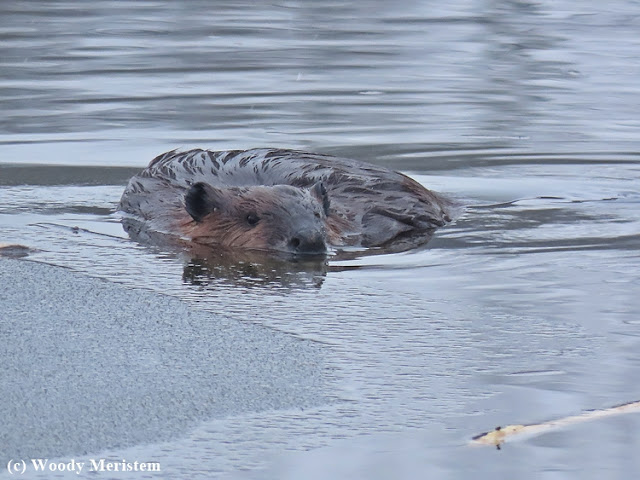 There, it  spent some time eating bark from a section of branch it had extracted from the feed bed – 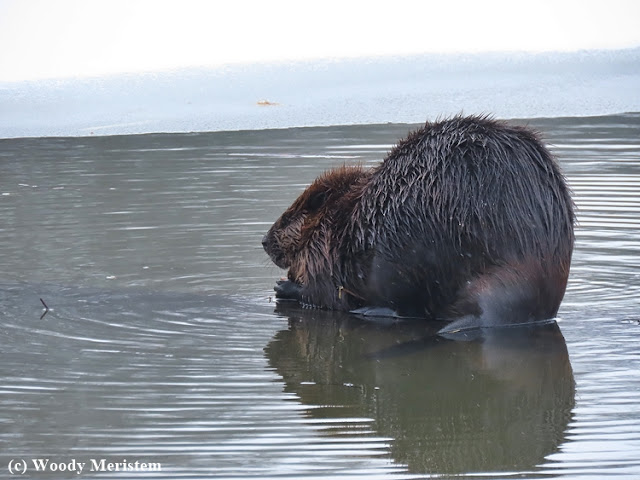 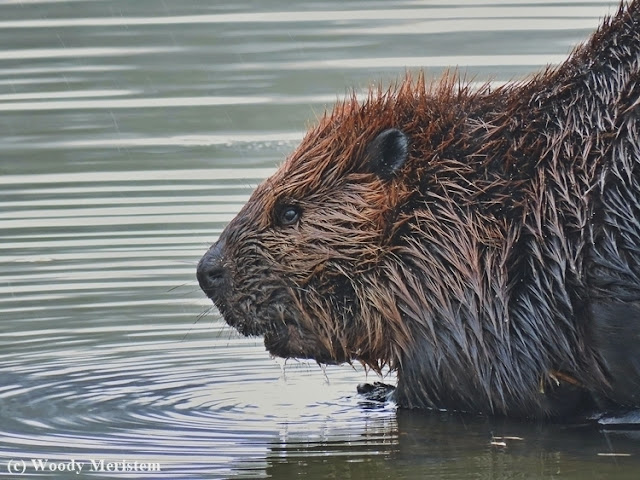 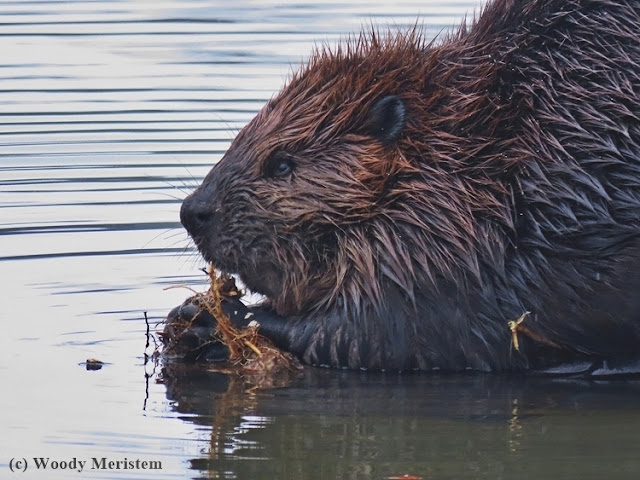 After a while it was joined by a young beaver (called a kit) that swam around the patch of open water, joined the adult on the fallen tree, went back in the water, dove and swam around some more. 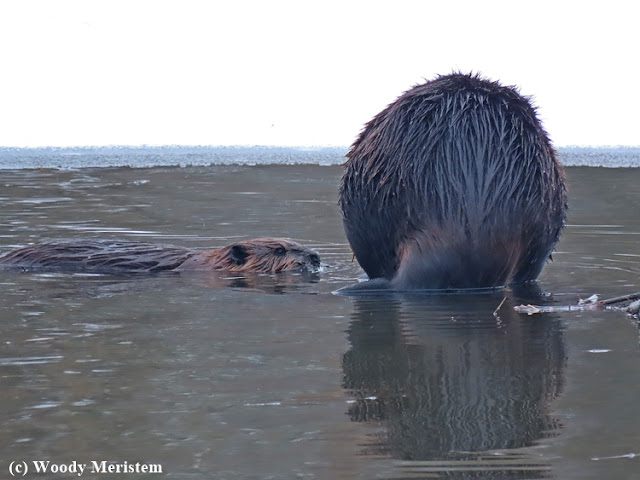 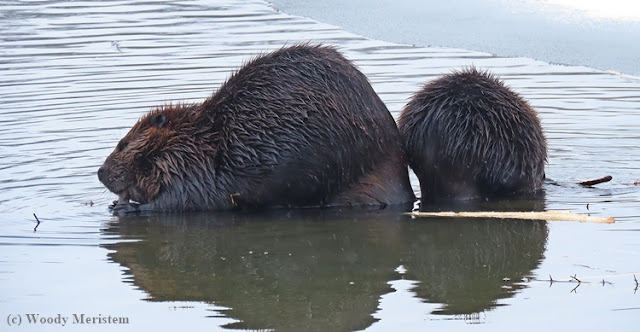 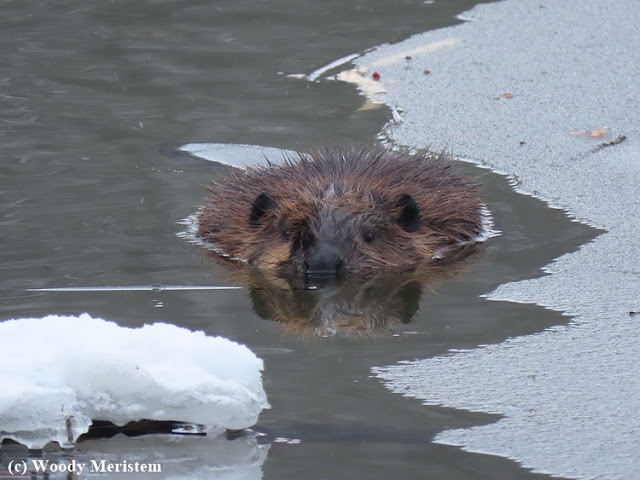 Beavers usually spend the daylight hours in their lodge, so both beavers eventually disappeared into the water.

The area around this pond, and around a smaller adjacent pond that the beavers also use, has few of the trees they favor for food so they may soon leave the pond again.
Posted by Woody Meristem at 4:30 PM

what great beaver photos...and I imagine you were bundled against the cold! Thanks for sharing them.

Truly fascinating. I knew none of these facts. A "feed bed".
Wonderful. And the video. Thank you for sharing this! I'll be sharing it with my husband :)

Thanks for stopping by my blog a bit ago. Beavers are such interesting animals. I see their activity more than I see them: chewing on tree trunks and downed trees. The one memorable experience was in Canada in a canoe on a lake and hearing what we thought was a gunshot and being very frightened. It was the beaver warning us away with its tail.

Terrific pictures of the beaver!

Wow, cool shots of the beaver. Looks very cold there, we do not see much ice here.
Thank you for linking up and sharing your post. Take care, enjoy your weekend!

Hello!:=) Great shots and info. The beavers do a great job!

How amazing to see these! They look a lot like the river otters we see here in the warmer waters. Great photos as always!

Wow - fabulous shots! We have beavers on our lake too.

Wow! How great to see so much beaver activity during the daylight. And a young one, to boot. When I see how many trees get felled around waterways where I live, I find it hard to believe that beavers were once trapped almost to complete elimination from New York State. Wonderful photos!

Fantastic and the ideal "music" - water lapping, beaver chewing. Once again, I've learned from your writing. Thank you, W. I keep wondering what camera and video recorders you use. Excellent quality images and vids. Kim in PA