There I was, minding my own business, walking down an old road from the mid-1800s that still gets occasional use, perhaps one or two vehicles a week. As I came over a small rise there was a lump in the road – and it moved!


The camera’s zoom lens brought the moving lump into focus, revealing it to be a porcupine walking up the road – 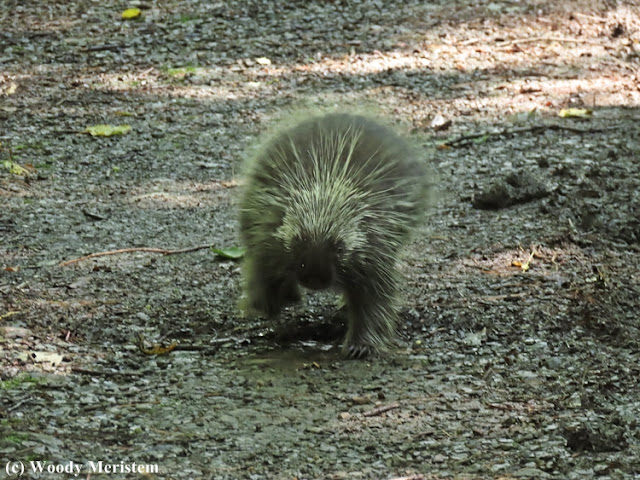 Porcupines have always remind me of the cartoon character Mr. Magoo: beady-eyed, near-sighted, somewhat bumbling, but – except for their occasional meeting with a fisher, bobcat or vehicle – things work out well in the end.


As it kept walking up the road the time came to switch the camera to video mode.


The porcupine came on and on, pausing to examine a fallen branch. There was a bit of hesitation as it appeared to pick up my scent, and then on it came. The porcupine reached my alpenstock, examined that, came closer still. And then I moved my foot –

From the fallen log the porcupine went first to one tree, then to another, and on to a third – a hemlock which apparently was just right, for it climbed that tree – 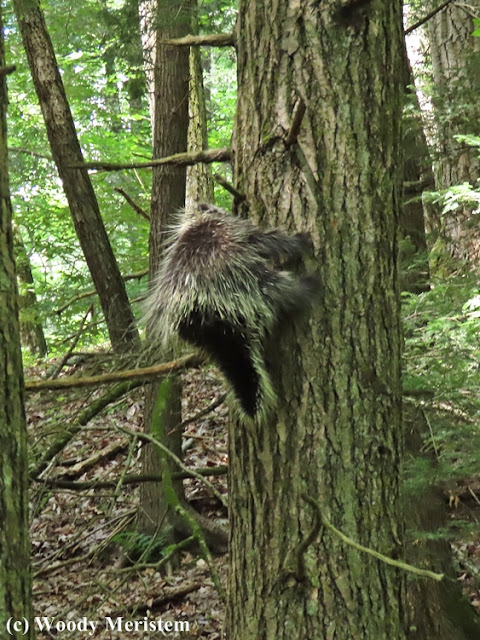 As it fled, it was probably the fastest porcupine I’ve ever seen. Fleet-of-foot they are not, their only effective defense comes from the 30,000 quills adorning their bodies and tail, a muscular tail that is snapped from side to side to repel and punish potential predators with a serving of quills.
Posted by Woody Meristem at 6:54 PM

Quite a surprise! I haven't ever seen one, and am amazed that he walked right up to you! Loved the video!

Cool sighting of the porcupine. Great photos, love the video!
Thank you for linking up and sharing your post. Take care and enjoy your day, wishing you a happy weekend.

They really are odd and comical looking! I saw one in the Rocky mts on a hike years ago and I couldn't believe my eyes! I stayed really still and let him pass! lol

How awesome! I loved the video and can't believe he came that close. I think I would have been the one running :D

Hi Woody! :) Your porcupine photos are great! Thanks so much for sharing! :)

I never saw the animal at first photo...exciting.
great shots