‘Twas the week before Christmas and all through the woods lay three inches of snow. And then – the temperature rose so by the time I walked the old road in the Big Woods there was less than an inch of snow on the ground. Not far along the old road a set of bobcat tracks appeared; the bobcat had walked in the opposite direction from the way I was going and the tracks had veered from the road to disappear in a large patch of extremely thorny shrubbery. 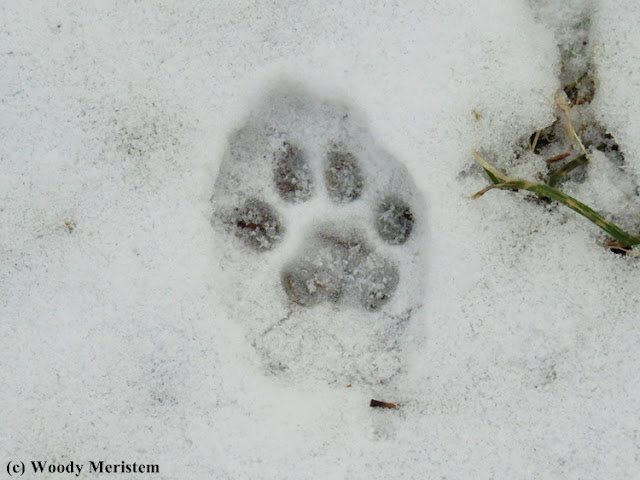 As I walked the road, I backtracked the bobcat as it wandered from one side of the road to the other in quest of a meal. And thus it went for over a mile until the spot where the bobcat had come out of another thick brushy patch and begun to walk along the road –

On up the road I went intersecting one set of squirrel tracks after another going across the road (this year has seen one of the gray squirrels’ periodic population booms). Along the way there was an area where two wild turkeys had left tracks as they'd crossed the road. 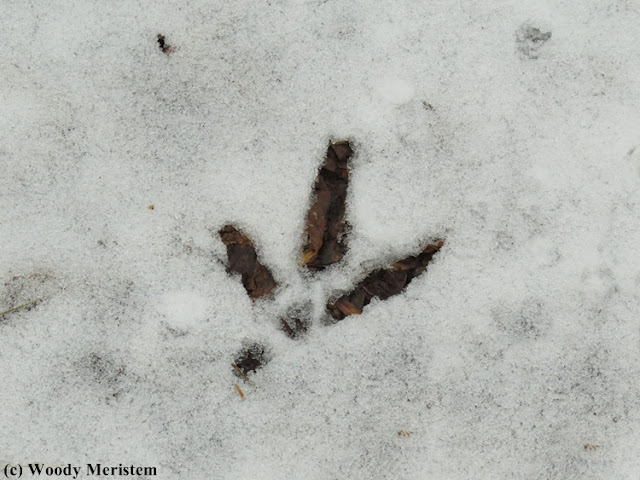 By then it was time to turn around and head home. Because I’d been following the bobcat’s tracks and keeping an eye out for tracks indicating that it had caught something to eat (it hadn’t) I’d missed another set of tracks mixed with those of the gray squirrels, the tracks of a fisher in quest of a meal of squirrel. Unlike bobcat, fox and coyote, fishers have five toes which show in their tracks – 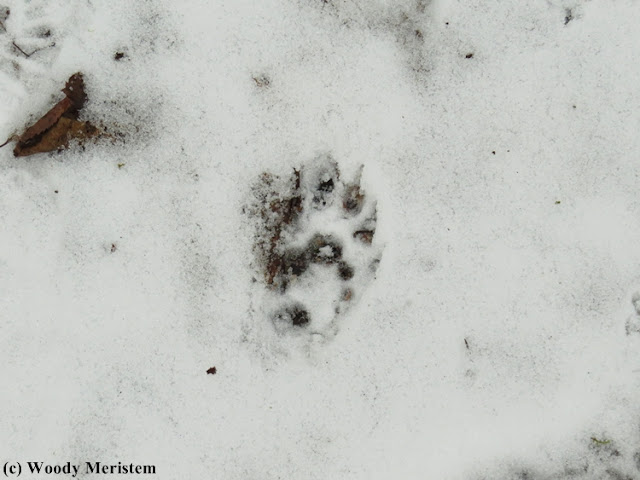 The fisher tracks weren’t distinct and they were soon lost amid a maze of squirrel tracks. By the next day rising temperatures had melted the last of the snow.
Posted by Woody Meristem at 4:48 AM

Perhaps it's best that some of the snow had melted...you have some very interesting tracks here, and I'm sure there will be more for you in the new year!
Best wishes for your success.
Kay
An Unfittie's Guide to Adventurous Travel

I think I once saw Bobcat tracks near here, but Fisher, not a chance. Merry Christmas Woody!

Hello, great post sharing the animal tracks. I would love to see the Bobcat and a Fisher. I have seen the wild turkeys in our woods. Great photos.
Thank you for linking up and sharing your post. I appreciate your visits and comments too. I wish you and your family a very Merry Christmas and Happy New Year! Enjoy your day!

That was great snow for preserving clear tracks. I love going out to the woods after snowfall and seeing all the tracks. I would never know that our woods was full of coyotes, foxes, fishers, minks, otters, and bobcats, not counting the deer and rabbits and squirrels we do get to lay eyes on now and then.