A few weeks ago I’d put a homemade camera trap at a spot that has proven very productive over the last few years. The camera takes videos during the daytime and still photos at night or when the light is dim. When I returned to change the memory card and batteries the camera didn’t look like it had just after it was put in place – 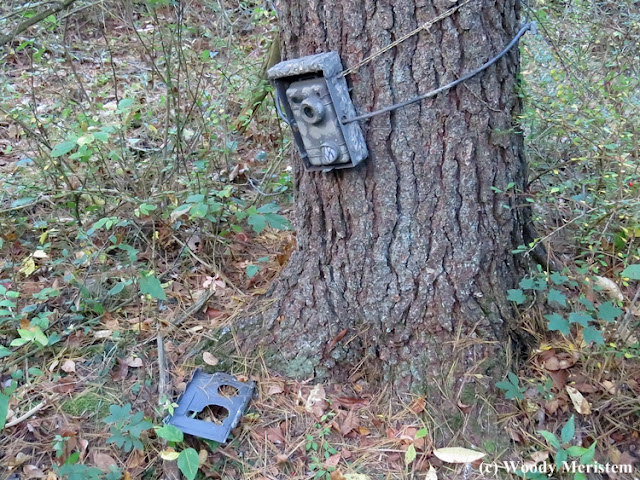 The first visitors were a female black bear and her cubs –


After the cub had smeared the lens glass all of the following videos and photos from the camera left something to be desired. The camera took a number of photographs of gray squirrels, then four days after the cubs visited a young male bear came into the clearing and ... –

The large male had come fairly early the next morning when there wasn’t enough light for the camera to take a video so it only took two still photos, the one in the video and this one of the bear at the camera – 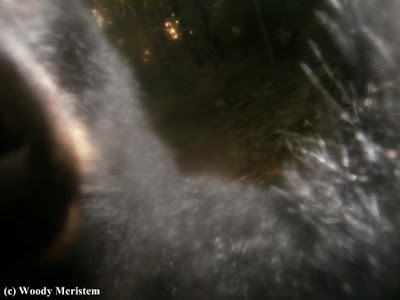 The camera has an extending lens which makes some noise as it extends, that sound probably piqued the bears’ curiosity, and the camera carries many different odors of materials used in its construction. The cable lock binding the camera to the tree saved the camera from further damage.

Posted by Woody Meristem at 5:26 AM

Pretty darn amazing. I can't imagine that a camera staying safe here in Oklahoma. No damage by bears but people seem to destroy what they cannot steal.

Hello, WOW! I just love the bears. Wonderful captures on video. I am glad they did not break the camera, they look like they were really fooling around with it. Great post. I appreciate your being part of my 200th Critter party. Thank you for linking up and sharing your post. Happy Saturday, enjoy your weekend!

Wow! So much fun! I loved being almost in that "bear hug" of the male's chest...safe at home! :-) Would certainly never want that experience in real life! Great footage!

Hello. An exciting and a great post and videos!

What a fantastic place for videos! I love how the little ones were caught playing. I'm so glad that the camera wasn't damaged.

Sometimes bears are attracted to the petroleum in plastics. I've had all my cameras housed in steel boxes a hassle but necessary to protect the investment. Great work thank you for this blog.
Nikon-CamTrapper
Chris
Dallas, Texas

Gee I would like to do that here. No bears but lots of other wildlife to see...enjoyed the videos...Michelle